Solving NHK G Not Received on TV after move in Kyoto

Something that may be useful.

Now there is much more to it than that. The TV was originally set up in a house with an outdoor antenna. One side on the street is in Kyoto, the other is in Osaka in a place midway between both cities.

We knocked down and rebuilt that house, so for 6+ months the TV was in a rented small apartment in Kyoto, also with an out-door antenna. A 5 minute car drive away.

The TV was then moved back to the rebuilt new house. This time the house doesn't have an outdoor antenna, but the TV signal is provided by the company also providing the internet service.
Japanese TVs have 2 Antenna inputs, one for the existing digital TV service and another for the BS (Broadcast Satellite ) input  and the new house needs an antenna splinter box to produce those signals from the one coax TV signal in the wall plate. 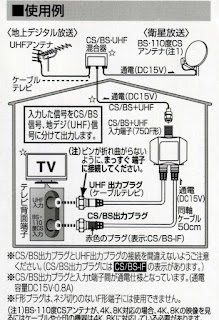 So we bought one of those (EDION for around ~1,500 yen) and then found we couldn't get NHK G on her TV. All the other channels were fine, and should could now see the BS channels she never had access to before. So she could still watch TV, except had to use the living room TV to watch the morning NHK G 15 minute drama at 8:00AM. Currently a series named SCARLET.

Now I expected it was a TV setting problem, but wasn't familiar enough with the channels to know, and couldn't find the Channel Scan menu item.

In Sydney Australia you had to rescan your Digital TV Channels as they were being added and changed all the time. Did it every few months otherwise that series you were watching in SD was now on a different HD channel.

Now we had 2 other TVs in the house that picked up NHK G just fine, and when I finally looked at the features on a cheap nobrand TV that could get NHK, I found that it was receiving NHK G Kyoto.
I could do the Channel Scan and Antenna Level options and all channels still worked. These menu items were in KATAKANA.

The TV that couldn't get NHK G, had that channel set to NHK G Osaka. Doing the Antenna Level setting showed that channel had 0 signal level.
So after spending more time with her TV, eventually found the Channel Scan option 3 menu items down, and only indirectly called "Channel Scan", and it wasn't in KATAKANA.  Doing that then added NHK G Kyoto to the list that had NHK G Osaka.

Assigning the remote controller 1 button to NHK G Kyoto instead of NHK Osaka fixed her problem, and the Antenna Level settings for all received channels was now all good.

So the internet providers selection of TV channels didn't match the original selection of channels for the area, and this stuff isn't the same as if you had an analogue antenna on the roof.  The provider may have this info on line. I haven't looked.

Now NHK E on her TV was always set to Osaka and that still works.

Being more familiar now with the Kanji used in her Panasonic TV menus helped me work out what wasn't set correctly.  I was involved in developing digital products with menu systems myself in the past, and you just cannot win what ever you do to try and make things really simple.  Panasonic hadn't considered someone like me with uneven Japanese reading skills as the technical person problem solving their TV.  I expect the TV manual would have helped a lot, but we don't have that any more.

The TV service provider could have provided both NHK G Osaka and NHK G Kyoto, and some simple info too on what the channels were, but their strategy was to charge you a reasonable fee, includes the antenna splitter,  to set up one TV in the house only. Then way more for the second and other TVs.  We currently have 3 and the one they set up wasn't my sisters. Guessing most people would have just payed the installers to set up all TVs.

Apparently NHK G in the different cities have slightly different localised news, with everything else being the same.  Makes sense.