Classic Tracks and the Mix

Like a whole lot of other people, I've spent the last weeks playing a lot of David Bowie, and watched the BBC documentary "David Bowie: Five Years".   A lot of musicians have passed this year, but some have much more impact than others.  Bowie was one.  Jon English was another.

The comments from Robert Fripp and Tony Visconti have been food for thought on the making of some of Bowie's tracks. It all means more now that I have done this recording thing and have my own small project studio.

But listening hard to the actual track "We Can Be Heroes" doesn't give a lot of insight. It all seems very murky.  Eno's synth stuff isn't very audible.  Fripp's feedback main part isn't clear either.  Not the way you can hear it in the Tony Visconti YouTube video where he points these things out and solos the parts.

Yesterday I came across Sammy Hagar's interview about the 30th anniversary of Van Halen's 5150 album from a Guitar World Facebook post, and pulled that CD out for a listen too.  Eddie was a real hero of mine at the time. A real innovator, but I've come back to this again looking at the mix.

In Metallica's Black Album on tracks like "Enter Sandman", there are multiple guitar parts playing the same thing to produce a thicker sound, panned across the sound stage.   This isn't what you find in 5150.  You will have Eddies guitar panned leftish, then a plate reverb on it panned hard right. And then a single over dub with the solos.  Of course Eddie's playing is so interesting it doesn't need embellishing.  Most of the early Van Halen albums have this minimal production.

I don't play like Eddie, but was playing with this left guitar, right reverb, minimal production  yesterday afternoon on a little thing. It was the first time in about a year and a half I plugged in my J-Bass too, so not a bad way to spend some time on an Easter Saturday. 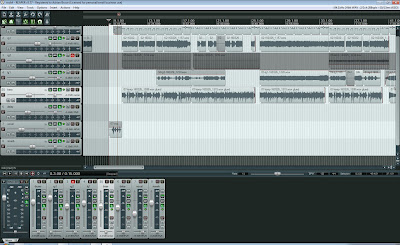 Something to unwind with...   and it sounds ok to me.  The Jet Flanger on the Lead Guitar is over the top though and the progression is .... very basic, shall we say.  It is more about the sound with just 5 tracks.

We have an Audio Technica AT2020 Condenser Microphone and run that through a Behringer MIC100 phantom power Tube Preamp, directly into our Audio Interface.   All the instruments are DI'ed.

This is the link on SoundCloud of this minimally produced clip.  It isn't at all serious in any of it's 1 min 13 second length!


Posted by Adrian Bruce @Megacurve at 4:12 PM No comments: 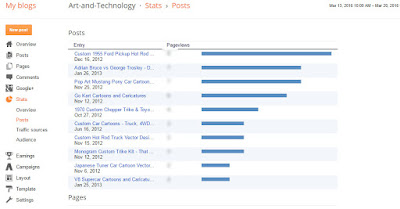 We post on a few different subjects.  Music Production, Artwork, Electronics and Software Stuff, but what actually gets on going views is always our Automotive Artwork related material.

Our website  views are more evenly distributed between Guitar/Audio topics and the Car Cartoons and Logos. 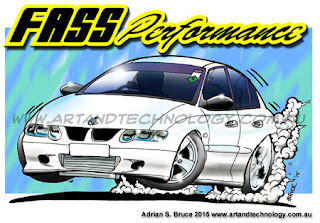 We hadn't posted anything new for a few weeks, so that when we look at our Blog Stats this morning we see the above older posts coming up consistently.

Any new post gets an immediate blip of views, then dies away in a day or two. Especially if you link to it from Twitter or Facebook. That is why so many are continually posting to keep that blip a  constant on those platforms.     It is a bit like a sugar hit. But has little on going benefit.

The Long Tail, was a thing a few years ago (look it up), but has been disproved as viable business model now.

My take away from this is that I can post about anything I feel like, (like my 15 years living and working in the Music Technology Business in Japan) but what actually is appreciated is the Car Caricatures, Logos and Cartoon stuff....

Posted by Adrian Bruce @Megacurve at 3:31 PM No comments: