I used to always check out what new magazines were at the newsagent/bookstores and there was always something new to get involved with. 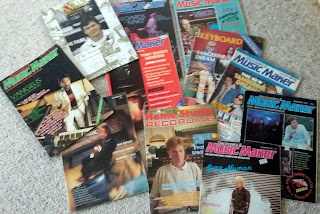 Things are very different now. The magazine sections of most Newsagents have been  reduced to a very small selection at the back somewhere. Many magazines have gone out of business completely.

In fact I stopped buying the last 2 monthly magazines "I had to have each month"  the later half of last year.  I now don't miss them.

The Internet has had a lot to do with that. Much of the interesting content that you could only find in the magazines I liked is now self published on websites, forums and blogs directly by the authors. I've done that myself. Advertisers also have many avenues on the focused sites or forums as well.

The magazines with reviews eventually become irrelevant to me, as a magazines income comes from their own advertisers, and the stuff they will review. The aim of the magazine is to sell stuff. Independent opinion from knowledgeable and not paid in anyway by the supplier of the thing is much more useful if you are actually after something.

Over the last few years I've been throwing out many of the magazines I collected for decades. They were once  the only way to get the news or practical knowledge you needed to do a whole raft of things. Some still have nostalgic value as they made a contribution to who I am now, but many don't  in the current world. I have to ask myself, "have I looked at this in the last 15 years, and would I in the future?".

I'm getting to the stage I don't need all the bookshelves I have.  The magazines ARE vanishing...

Have also been getting rid of "technical work" related books. Some of these could have value on eBay, but because we are in Australia, and not a "technical" place, postage make most of them more trouble than they are worth to sell. I bought most of them overseas or from Amazon.

Posted by Adrian Bruce @Megacurve at 8:23 PM No comments: