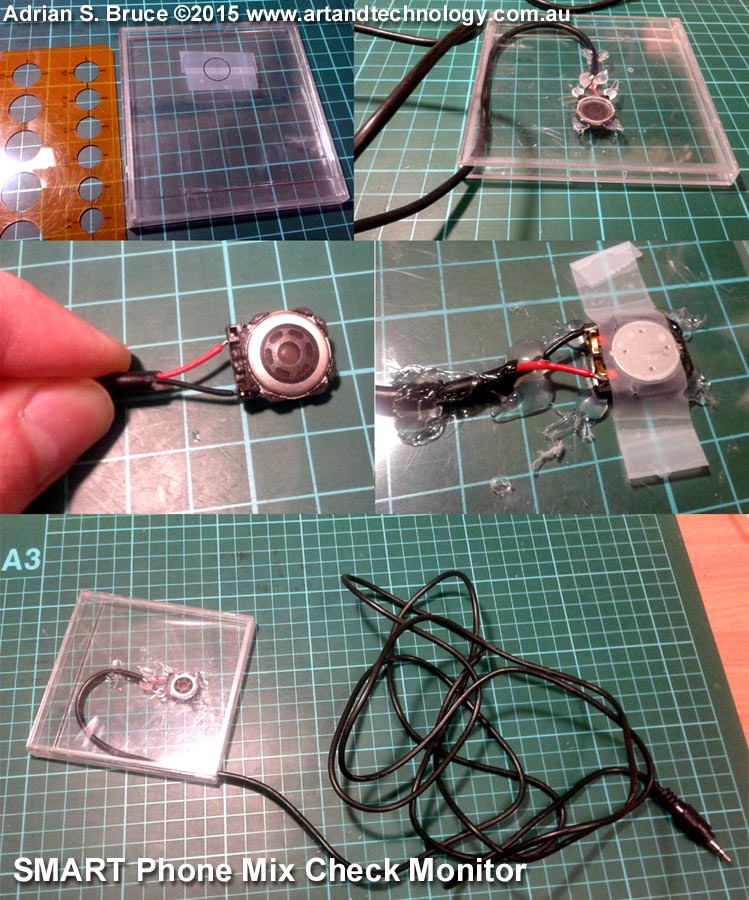 A few months ago we did a Blog post on changing monitor environments since the 1980s  that suggested a smart phone monitor is also important to now consider...

So this is our mono SMART Phone Mix Monitor Prototype.  It is based on a SAMSUNG Galaxy Smart Phone Speaker from eBay, an old floppy disc case and a stereo jack and cable salvaged from a PC speaker set. Put together using a hot glue gun.

It is actually an 8 ohm driver. The unit needs to be mounted to a panel to give any type of sound volume, hence the floppy case. It will be wired up in a similar way to our Auratone clone.  The details of making that can be found here.

This is a round device, which makes it a little easier to cut the hole for than the Apple iPhone spare parts I saw....

Posted by Adrian Bruce @Megacurve at 4:15 PM No comments:

It is based on the theme of Car rebuilding/ Hot Rodding.  This combines the comic with interactive jokes on the Fortune and Event cards.  Of course the things that help you get ahead in this car "rebuild/ hot rodding" game are a skilled friend and having the great workshop tools, like the "ACME MOTIVATOR", "ACME STEEL CAPPED BOOTS OF STOMPING GOODNESS" and "ACME BOLT PERSUASION" .......and all the "ACME PARTS" you need

It is still just an experiment at the moment and focussed on the Card Jokes and Illustrations. 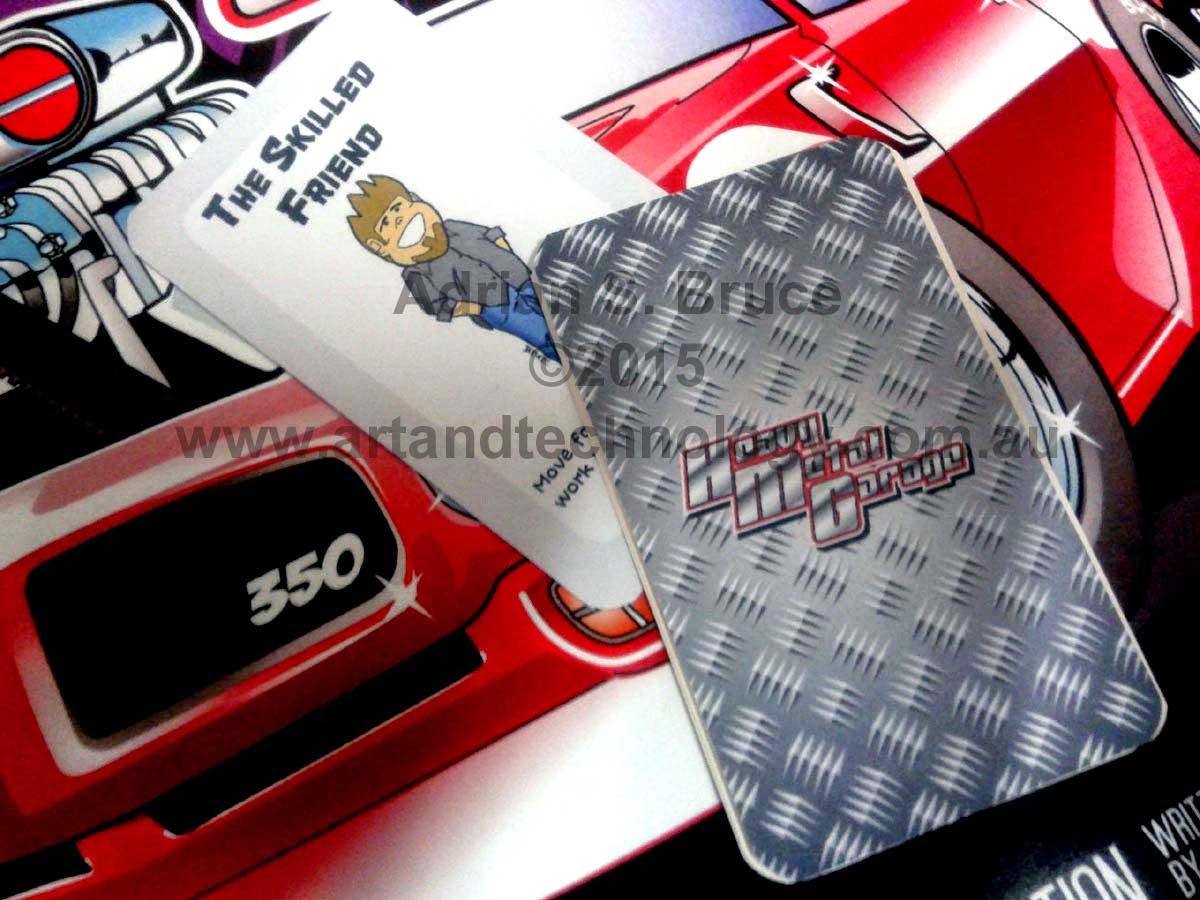 You would say boardgames are dead and gone, but I think the same about Vinyl Records. And they aren't. You also cannot drink with your computer!

Posted by Adrian Bruce @Megacurve at 9:53 PM No comments:

Labels: board game and cards 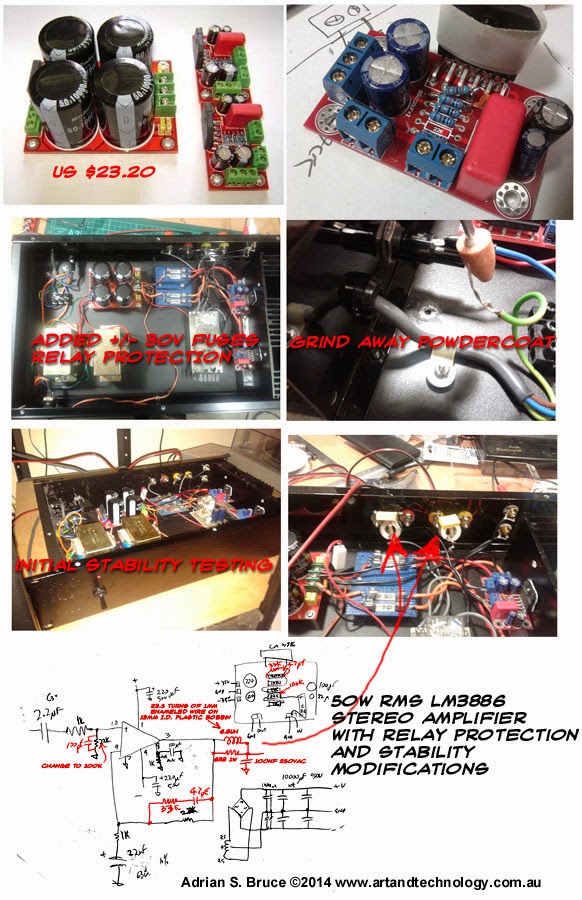 We use passive speakers in our modest studio and so use a stereo amp to power them.  The 1970s Rotel Receiver we had been using for the last 8 years had recently died and we were using a stand in CLASS T amp, that even though it sounded good, has a reputation for an early death.

We also had all the bits and pieces from prototype things we have developed over the years and after seeing you can get the assembled guts of an amplifier, using the wonderful LM3886 IC on ebay for about the same as just buying the ICs , it seemed a useful exercise to make an amplifier using them.  All I really had to buy was a case to put it in. So I ordered a flat pack rack box and slowly set to work among the other paid projects I had going.

For your money, you don't get any documentation or schematics of any kind. I had to reverse engineer the PCBs to see what I had.

Without going into all the details (may be I will write it all up later, and clean up all my hand drawn sketches), over a few months it is now finished.  Some pictures above of the initial test assembly.

We have the mains and transformers front left, and the signal inputs back right, as far away as possible.  The heatsinks with the modules run down the far right of the case, as the case top cover has ventilation slots in that area.

I used two multi-tapped transformers to get the +/- 24VAC needed for the PSU board, as I had them.  I wired the primaries out of phase to each other, like a hum bucker. Does that make it hum less?   Not sure, but the resulting amp has no background hum.

The case is connected to mains earth. The audio electronics are only earthed via the RCA input ground connections. The RCA sockets are isolated from the case.  Possibly a 10R between audio ground and chassis would not go astray here....

I added 2A fuses in the 30V rails to the modules, and an old relay speaker protection unit I had. Modified it with a bigger relay and changed the 30V to 15V supply to include a 5W 56R series resistor and a 7815 regulator, instead of just a zener diode. Runs cooler that way.

We bought a Dremel grinding stone,  using it in our standard drill, to remove the powdercoat around all the case screw holes and any place an earth connection is needed.  This is required to actually make a completely earthed and shielded metal box.

During the initial testing of the assembled modules we found they worked, but there was a low level oscillation you call motor boating.  The modules don't have any stability components to roll of the HF amp gain, or any output zobel networks. The High pass around the feedback (the 1k and 22uF) is at a very low 7Hz and would be better off being a bit higher.  The data sheet suggests a cap across the differential input of the LM3886 helps too, but we have not done this.
Adding these fixed, or seems to at the moment, with normal RCA cables connected to the input, the issues and now it seems like a rock solid amp module.  If it was just an opamp, a capacitor across the feedback resistor would have been enough, but it isn't just like an opamp...

I also reduced the input attenuation so the volume on my monitor controller has the range I'm used to.
The amp is way quieter then the Rotel amp was.  There is no audible hum or noise from the amp they way I use it.

The amp speaker outputs are connected to my studio speaker selector box, that also has a headphone output and additional PTC speaker protection. This connects to 4 sets of speakers and can mute the speakers for just headphone listening.

Our Megacurve music tracks can be found at SoundCloud.

Info on our DIY Auratone clone and monitor controller can be found here.

Posted by Adrian Bruce @Megacurve at 4:33 PM No comments: