The Continuing Saga of our Studio Amp Electrolytics 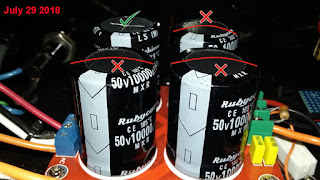 We previously covered building a great sounding Studio Amplifier from very affordable modules from eBay. We also covered the poor quality of the Electrolytic capacitors from China, despite what brand they may have on them.

Opening up the Amplifier again today shows that all of the Chinese supplied capacitors are failing, and the single good nichinon I replaced the worst one with last time is fine.

So we are ordering more nichinon  10,000uF 50V capacitors and will replaced the bulging ones when they come in from RS-Components.

Have known about Comixology comic app and store for a long time, but only installed and used it for the first time last week.  Have been a Kindle fan for novels many years now, but not being a hard core Comic fan meant it hadn't been relevant.

I needed it to check out Andy Clift's self published Captain Cosmic , and to get the 2017 Valerian Shougouzo inc . The show runner for Dark Matter recommended the Silver Age styled Captain Cosmic and had gotten Andy to do some comic Dark Matter illustrations for a possible Dark Matter comic book to follow on from the 3 TV seasons.  I now know Comixology does have stuff for me.

When I was in Japan in May 2018, it seems that half the young people riding on the train were reading Manga on their phones. Don't know what App or site they were using, but it seems to be everywhere. Saw the same manga on a phone in Sydney on the train last week.  The typical very small page size of a black and white manga translates to a small phone screen without much trouble. The text is not too small to see relative to the page size.   An American comic is more trouble with the larger page, and a European Album (like Valerian) is not actually readable on a phone.

Maybe the manga format works better as it is also more about what the characters are feeling rather than what they are doing? Maybe.

I used Comixology on a 10" Samsung Tab3.  I prefer to use it in landscape mode and have the page expended to fit that width, so I can read the text.  Perfect Viewer for my own CBR files works ok that way too.

But Comixology has an extra mode, where instead of showing the whole page, it will pan and zoom each panel to be full screen when you tap the screen to go to the next panel.

This makes reading much easier for me.  But I wonder how that impacts people that are really into traditional comics, where the panel relationships and relative sizes are significant?   All panels may as well be all the same size if this is they way they are being read, which would seem to impact the culture of the comic book. Except, it does animate the zooming of your eye on the page, so you don't loose the panels layout.  Interesting.

Both Captain Cosmic , and  Valerian Shougouzo inc  are complete standalone stories.  I have to say that Valerian is more to my taste and carries on what I think comics do very well.

Depending on what the art in a book is, having the paper version can be far better. But when space is a problem, the digital approach is a winner, very portable, and saves travelling to a store with limited lines anyway.

My own 3 Terraform Stories can be read for free online here.


Posted by Adrian Bruce @Megacurve at 5:02 PM No comments: