WEBTOONS and their Huge Reader Base.

We did an experiment and put a variation of one of our Webcomics on WEBTOONS.COM

It is called BOTS IN SPACE if you want to search for it.  It took a bit of work to convert it into vertical single panels, 800 x 1135 in my case. Been there a week and put up 4 episodes. 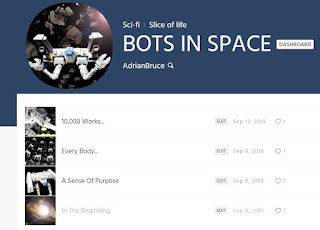 This was an experiment to see if this massive Webcomics site would result in people reading it without me actually promoting it, and seeing if it differed much from my own website hosting.  To see if the fact it was on Webtoons made any difference at all.

I had read it did.

Now it isn't a teen high school, fantasy or romance thing, which is what popular Japanese Manga and Anime are, and what looks like the bulk of the popular series there are.  So not a typical work for that market, and as I only have 4 episodes there, that may comprise the result too.

WEBTOONS comics from the front page look very much like Shonen Jump, one of the main Japanese Manga and the place all this hugely popular ANIME came from.  Very much aimed at 'teens. There is also the girls version.  My comic here does not fit that market at all, but think the next things I try must.

But so far being on WEBTOONS.COM didn't mean anything.  Promoting it to people that are interested seems more important than the actual site it is hosted on.  The WEBTOONS Phone App is slick and makes reading even a 1000 pages easy.  That is how I read Sithrah. But I would say Jason Brubaker already had an audience interested in his previous work reMIND anyway, that made it a success on WEBTOONS, independent of the fact they were paying him to do so.

My Historical/Autobiographical work had a lot of interest when I posted it to a small group very interested in the things I developed during my career. They already knew me, and that is why they read it and gave the positive feedback they did.   If I made a version for Webtoons, I expect it too would only have the same 6 views. I had also posted a link to that on a Facebeook comic page that had given some great feedback on a few pages from it, but the group itself was not interested in it at all. After following that group for a while, and seeing many dozens of the members post their version of Batman, Superman or Sexy Girl Superhero it was pretty obvious story and actual Sequential Art isn't upmost in their thoughts.

So getting possible readers to know why your interesting would seem important before anyone will give your comic a try. Is this just the celebrity culture around now or just a case of it isn't what you know but who you know, or rather who knows you in the world of social media?

Update: Sep 26 2019. Now a couple of weeks later, and still at 6 followers. Unless you know where to look, the comic is not easy to find now, being lost in all the other new and updated comics. This just enforces our view that the site itself doesn't help your comic with its vast reader base without additional promotion. Webtoons doesn't help you with that at all.