Freak Kitchen: Discovering Music That Speaks To You 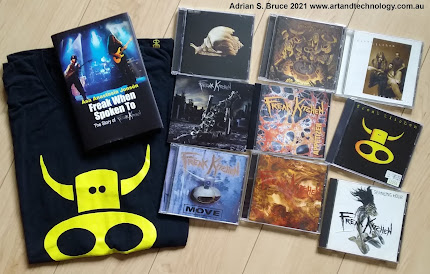 Discovering music is such a random thing. There is so much out there, you will only ever come across a small selection.

I first head of FREAK KITCHEN around 2014 on the community TV show in Sydney Australia, GUITAR GODS AND MASTERPIECES.   Not the show that would ever be on a commercial network, but I am clad they existed. Since then the Community Channel in Sydney was shut down and is now home shopping or something,  You can find this on the extra channels like 7mate on occasion, and now YouTube.

What I first heard was FREAK OF THE WEEK, from their second last album. I then found their videos on YouTube, then bought the COOKING WITH PAGANS CD from Amazon USA, as it wasn't available in backwards Australia.

Loved it, and GGAM would show various Mattias guitar tutorials and videos sometimes.

Now 2 years ago I moved back to Japan, and have watched more YouTube than previously, and learnt about their back catalogue, and what they have been about. And Freak Guitar too.  And I have now bought all their old CDs and their book from second hand stores here in Japan in the last 7 months or so. Become quite the fan. Even bought the T-shirt!

Only just finished reading FREAK WHEN SPOKEN TO, and it seems amazing to me that they had released 4 albums, and the drummer and bass player still couldn't make a living from music, and with other issues, quit the band. I love those early albums. JAPAN was one of the places they were popular, so why I could get all their old CDs.

My last 5 songs have been very influenced by Mattias "IA" Eklundh in so many ways. Drop C# on a Strat being one. They say things that are meaningful to me, in a metal type way. Wish I had discovered them way earlier.

I know there is so much music out their I would love but will never come across. But also no-one has that much time to search!

And you will note that shirt in various cartoons of me I have done in the last 6 months too....

I'm not always such a huge fan of some of his IAs wiggly harmonic lead stuff though. Technically amazing, but not always melodically musical to me. You are not going to want to hum it which I think is important. 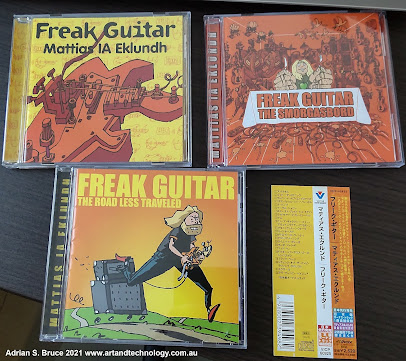 His FREAK GUITAR albums are more that direction, and I tracked down second hand CDs of those too. Eddie Van Halen's leads are far more to my liking, even if that is not what I try and do at all.