If you have read this blog before you will have noticed recent comic book related posts.

Particularly my own Comic. And this is the trailer:

Earlier today I've put finishing touches on story 3 in that universe. This one being a short 6 page Manga (black with tone) styled side/sub story done in Clip Studio Paint.  As much to learn CSP and maybe focus more on the longer manga style comic. Having now tried black only and tone, it does dramatically reduce the time to do a page with reasonable detail.

I like it and in finding out about the show and the creators behind it see they have been influenced by a lot of things I like. It was made by people that brought the world the TV STARGATE. Now TV is a conservative place, where it is difficult to sell new, unknown characters and settings, so these guys did the first scripts as a 4 issue Dark Horse comic book to have "established IP" before starting the TV pitches.

Well it seemed to have worked. 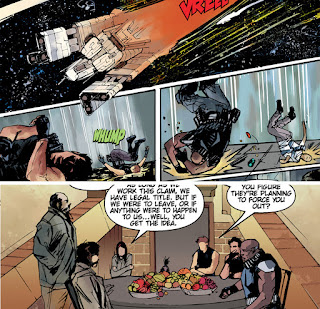 So I've also  read in the last 2 weeks DARK MATTER: Rebirth.  The story is a little different from what they did years latter for the TV series, but pretty much the same thing with the same attraction.  My only comment will be the artwork is sketchy and looks very rushed to me.... characters in the background will have no detail... like faces for example!

The other thing about the TV Series Dark Matter I really appreciate is the soundtrack music. That music stuff being another interest as you may have noticed.   Mostly rhythmic, sequenced synth  riff based  rock...   I could do more the Comic + Synth Rock Music thing... what do you think?

Anyway, DARK MATTER reminds my of Firefly and a few other things and I think it is worth checking out.