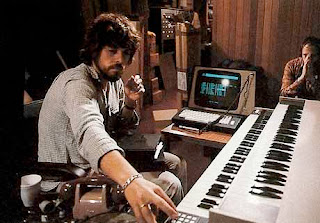 He recorded Pink Floyd's "Dark Side Of The Moon",  had his own Alan Parsons Project and many other things. A very well known Producer and Recording Engineer.

He was also a Fairlight CMI user, a system I was involved with developing before moving to Japan and working for Roland.

I had been working at Roland in Japan for some time when I went to a Los Angeles Audio Engineering Society (AES) Conference and Exhibition with 3 other Japanese Roland Engineers.

One of them, Mr Serri, was the manager of the E-660 Digital EQ Product. On entering the conference Mr Serri and myself were told we had a brief meeting to attend. We were taken to one of the guests hotel rooms and Alan was waiting.

Mr Serri was introduced as the person responsible for the E-660 and me as "Roland staff" or something like that.... I don't think I got a mention by name..... Alan was in a hurry so we sat around his room's small  coffee table, he talked and asked questions directly to me, I took notes of what he had thought about the E-660 during his evaluation and translated Mr Serri's answers and Alan's questions as required...

Then it was over.

I didn't get to say anything about anything other than the E-660.... or even introduce myself.. he just assumed I was a translator.