Some of the funniest Topgear has been when the guys get crap old cars, and go on a cross country Road Trip.  Crap Supercars, Old English Rubbish, and even Topgear USA's most dangerous American cars Road Trip were all very entertaining.

Part of what makes them funny are the driver personalities in sync with the foibles of the crap car they are trying to cope with.  It is all lighting in a bottle though, and only a few of such episodes have been really side splitting.

Deep Purple's Black Night starts as James put the boot into the black Lambo for a fast lap... and the car just pees all over the track and doesn't go any where......    Jeremy disappears into a cloud of tire smoke as the Yellow Heap of British Engineering can not make it up the incline to get to the hill start test....

And then this type of thing:

"Owning a TVR in the past was like owning a bear. I mean it was great, until it pulled your head off, which it would."

"That Zonda, really! It's like a lion in orange dungarees. Kind of fierce, but ridiculous all at the same time."

This is the thing you have to remember, Alfa build a car to be as good as a car can be... briefly.

I will miss the old Jeremy Clarkson Topgear, that is no more...

We have tried on occasion to capture the funny in the car relationship.  Part of the attraction of caricature and cartooning.

The exaggeration and play on words..

And some of it is just guy stuff..

And in our ongoing voyage of discovery, to explore new worlds and boldly go...,  we are experimenting with different uses of our cartooning and templates we set up for the now completed Heavy Metal Garage Drinking Game.  We have found using card sleeves make prototyping of this straight forward.  Card Stock, Screen Board and all the usual things we do our illustration work with all helps too.

In the last few days we have applied this Heavy Metal Garage ROADTRIP  scenario to the dungeon crawl d20 D&D board game system to make a prototype board game.

Now we hadn't had any experience with RPGs at all, not even at university , but there is so much stuff out there on the d20 that applying it has just required a bit of Googling. Our last 5 months of trying various modern board and card games has also helped. Ahhh, the cartoon joke dungeon of Munchkin, the style and beauty of Tokaido and Tsuro, the tiles and strategy of  Forbidden Island, appeal more than Nemos War or such strategy game.

A single 20 sided dice actually makes things simple and controllable. This prototype is still using the D&D terms AC, HP, ATTACK and DAMAGE, but the reality is these are just SKILL, HEALTH, DURABILITY and GREASE MONKEYness in this setting. 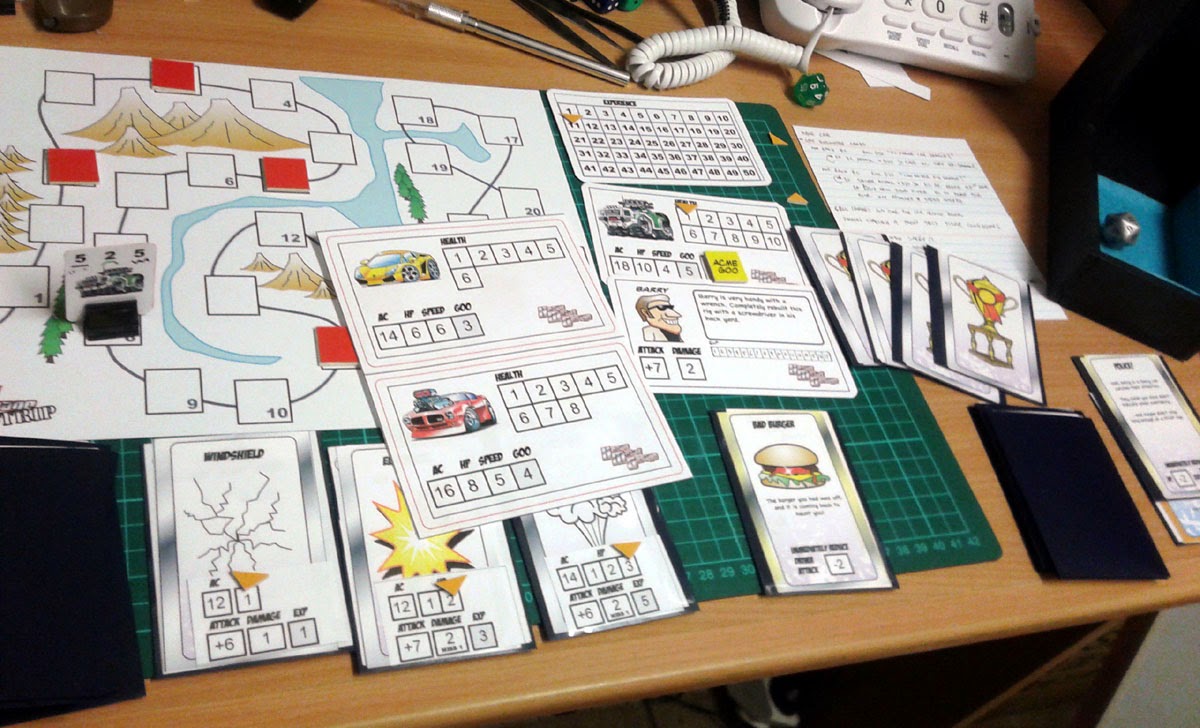 "So there I was, 20 miles out of the last town and the bloody engine catches fire!So we pulled to the side of the road, and because the hamburger I had made me sick, it took 3 attempts to put the fire out, and it caused a bit of damage.

Something I'll have to do something about when I get to the next town, which I'll have to limp to..... hope I don't get another flat tire, or the oil leak gets worse."

This came out of one of the tests I just did.... which is what we want. The further you go, the more stuff will go wrong with the car that needs to be fixed to keep it on the road.  At towns you can get better help, food and parts. Some of that will help. Some will not.  So it has EVENT CARDS and TOWN CARDS, and towns are set up randomly along the route at set up.

Just needs to be funnier and somehow presented via more cartoons or prose...  and at the same time simpler to manage.  Keeping track of Damage and Hit Points isn't hard, but really all too geeky.  I'm just as happy with having an interesting story and little strategy, but gamers aren't like that.
There is a 1001 Arabian Nights board game that comes with a 300 page book with almost 2,000 numbered story paragraphs referenced from the game system.  This actually tells stories, but you have little control over anything. A booklet with comic strips may help, but be a huge task to complete and not practical.

May go play in the world of Computer Music or cartooning for a while and see what I think of it all when I come back.