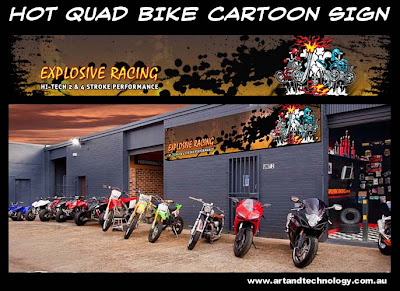 We did a design for t-shirts for this Hot Quad Bike Business that they have also used for store signs and branding.

It was done with limited flat colors for silk screen use.

We may be able to help you too, contact us at Art & Technology

Posted by Adrian Bruce @Megacurve at 3:42 PM No comments:


Type 2 Diabetes is called the silent killer and has become very common in those over 50 and especially those overweight.  The blood sugar level is not controlled, causing it to rise and this leads to problems. Blindness and death being among them. A simple blood test can detect it.

This initial draft infographic is one of  a proposed series to educate.  The background orange is symbolic of bringing blood glucose level under control to between 4.5 and 7.0.

The text is to help explain that what is eaten is as important as the medication. Your average friend does not know any of this. It also indicates that Diabetics cannot eat at most restaurants, unless they have something like meat or fish and a green salad!


I control my diabetes with diet, exercise and medication.
This means I cannot eat or must drastically limit most carbohydrates as well as sugar.
Things like white breads, spaghetti, noodles, pastry, potatoes and most starchy foods.
Things like carrots, cakes, green peas and pumpkin too.So please understand it isn't that I don’t want to go to that restaurant with you.  I just cannot eat what is on their menu.


Posted by Adrian Bruce @Megacurve at 10:28 PM No comments:

We have been involved in cartooning for a very long time. Caricatures and cartoons of people and machines. We also do work on commission, or to order.... And vector illustration too... And we are on Facebook if you want to do it that way... but better to

Contact us at Art & Technology and see how we can help you!


Posted by Adrian Bruce @Megacurve at 6:49 PM No comments: Car Club Event Posters that can also be used for Fund Raising T-shirt are a staple of our design work.  For the show and shine or car event. These can be done in various styles.

Posted by Adrian Bruce @Megacurve at 5:53 PM No comments:

Cute, simple bright designs for baby wear.  Can do custom work to your requirements too.....

But we do illustration and design work for posters, clothing, cards or books and can be contacted at Art & Technology

Posted by Adrian Bruce @Megacurve at 10:09 PM No comments:

Posters for bands, movies and books.

A new movie on them is out. Looks interesting.  The end of the recorded music business has made promoting live gigs a big thing again.

And we have done a few over the years.


Posted by Adrian Bruce @Megacurve at 4:27 PM No comments:

We just don't need too. There is enough excitement without it. Like the Music tracks here:

Our eBook of Car Cartoons, Jokes and How To at Amazon:

And the Cartoons, Caricatures, Illustrations, Signs and Logos we do: Posted by Adrian Bruce @Megacurve at 6:49 PM No comments:

At Roland & Fairlight, that was inventing cool technology for electronic musical  instrument's electronics, software and firmware.  Did a few products that are actually famous, but I was an engineer in the back room that you never heard of.  Didn't get a mention in developing the series III, the first modern sampler in Peter Vogel's History for example.

Same deal for my 15 years in Japan with Roland. But it fills me with pride to have been the architect and guy that did all the new original schematics of the Series III.

Hans Zimmer described in 2011  that the machine was way better than it should have been. This is what he used to get to where he is today:


"It did have a quality about it, and I don't think it was just luck, you know.
People are talking about the sonic quality of a series III Fairlight while forgetting the output stage of that thing was the same filter , and I "think" the same VCA , as was in a Jupiter 8 or Prophet 5.
I mean they ran through those, you know what ever... SSM chips and that was the filter on that thing, ..um… so there wasn't a reason really it should sound THAT much better than something else as everything else was using the same stuff , but I think there was a design aesthetic, and it is the guys building it.
I think the people that built our instruments, I see them as much as artists as I see them as scientists."

This is from Part 4 from 2min 30sec in these videos. All are actually in English.

I would love to say it was THAT much better because I was involved with it, but some of that was related to the variable sample rate I had inherited from the original design.

I also did things like the Graphics Display for the series II (because the one Kia Silverbrook designed couldn't work) and the double density floppy controller, a 12bit channel card of the series II, IIx that was built but not gone ahead with. I then went overseas and did, or was behind (proposed and started ) quite a few things at Roland in Japan. Elastic Audio, Human Rhythm, phrase based composition and Virtual Analog being some, but it was such a hard road, with many involved, that at the end, they aren't "my" products. I have always drawn and been involved with audio and music. I started making audio gear, synthesisers and the like as I didn't have any money to buy anything for my own musical interests.  The Art is something I have always needed to do too. Mostly drawing, but have also sculpted and constructed things.

Since returning to Australia in 2001 I've been involved in many non audio and Art projects to earn a living, usually on short term contracts or freelance with no full-time position on offer.
About 7 years ago I had applied for a job at Cochlear, which is audio related, and you would think that would be a great application of what I have learnt.  But I was rejected as the department manager interviewing me even told me "he didn't want me taking his job" after the HR girl had left.   So actually being experienced in something doesn't always help in Australia.   That isn't the way I have gone about things and I always thought that reflected very poorly on the Cochlear corporate culture. That they have since had a product recall doesn't surprise me when management has political motivation above all else.... not technical excellence, or making sure no harm is done to any customer. Other ex-Cochlear staff I've meet during my contracting since then have said it seems the place has gone out of its way to get rid of people that actually knew what they were doing, so in that light, it is kind of a compliment that they didn't want me!

So I have had to be flexible in what I do. You can check out some of the things we have been involved with here:

http://soundcloud.com/megacurve
http://www.youtube.com/adriansbruce
....and we have published a cartoon joke  eBook on Amazon too.

Now that is a cartoon and joke book, with some behind the scenes on how they are done. Not a drawing book as such, but how the rendering is done. 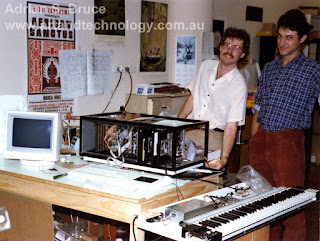 I have actually been told a book on "Designing the Future"  on the electronic music stuff I've designed  would be more interesting.  Luckily I have all my notes and diaries from those times.

I always took photos too. 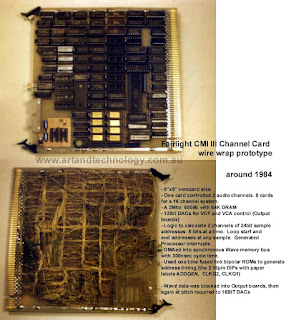 But my own experiences so far have told me, no one here wants to hear what I  have done. 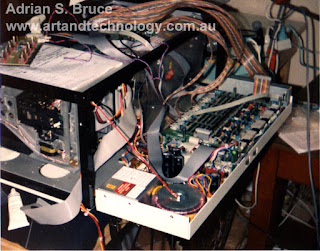 Love to hear from anyone interested in a possible Designing the Future book.  Most likely an eBook for the Kindle. It wouldn't be a technical design analysis at all. More as to how and why we did what we did. I was originally very much an audio/music/album/guitar/synth guy and considered sound quality important and was into amplifier and speaker design and all that had an impact...... 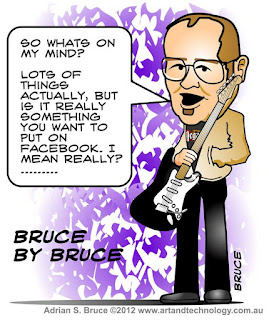 Posted by Adrian Bruce @Megacurve at 9:27 PM No comments:

We do cartoons and caricatures. Lots of People, Cars, Bikes, Boats, Trucks and Go Karts. A lot of this is for stickers, and trailer signs, as we do vector illustrations in Illustrator as well as Photoshop cartoons.  Stuff for Kids too. We have also now published a car and guy cartoon joke eBook, a bit like a TV car show, and that is at Amazon.  Hot CAR-toons, Dudes, Dudettes & Stuff At the Heavy Metal Garage

A press release on that is here,   http://prwire.com.au/permalink/37001/the-art-amp-technology-of-it-all

We are in Sydney Australia and would just love to talk.

Posted by Adrian Bruce @Megacurve at 4:24 PM No comments: