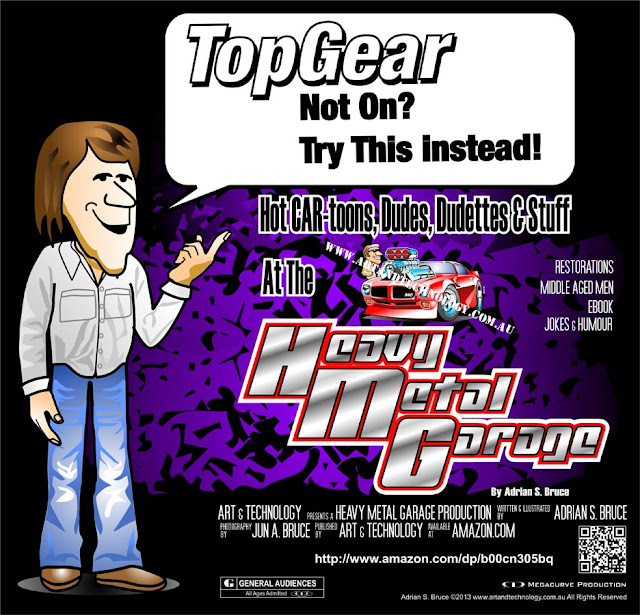 Usable on your Phone or Computer using the Free Kindle App: 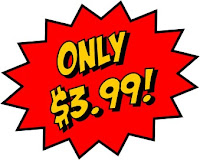 Posted by Adrian Bruce @Megacurve at 11:41 PM No comments:

Labels: TopGear not on?


It really doesn't involve this new funny car cartoon $3.99 eBook, but it could! And you can find out here:

And John Howard is yet to take credit for it..... But we will have to wait and see.

Posted by Adrian Bruce @Megacurve at 10:01 PM No comments: 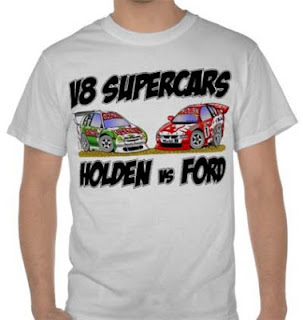 Posted by Adrian Bruce @Megacurve at 12:10 AM No comments:

eBooks need a cover designed.  Despite the well known saying, "don't judge a book by its cover", people do.

Most eReaders only have a greyscale eInk display at the present time. In the picture above we have the Kindle 6" WiFi on the left with our book, and on the right the Kindle App on a Samsung Android Phone with a 4" display. Same size as the original iPhone.   It has to look good on both displays.

We have done our own cover as a vector design. That means we can make it as big or small as we need. Even though the file that is included in the book, and actually uploaded to Amazon was a jpeg file.

It is interesting to see the Book Marketing Guide and Smashwords Style Guide from Smashword's  Mark Coker don't look that great when viewed on an eInk Kindle. There isn't enough contrast and they are very washed out.  Mark Coker provides a list of such cover designers at Smashwords, but maybe you should contact me first!

For some reason some people have also used text that isn't black in their eBook. This too is washed out and not appropriate, even though it would be fine on an iPad.

Our eBook  Hot CAR-toons, Dudes, Dudettes & Stuff At the Heavy Metal Garage is available at Amazon.

Then there is the promotional material:


Or even video teaser?

Like everyone else, after trying an eInk Kindle and seeing how fast and easy getting books into it is, and how that it is actually better than a paper back on paper, I've become a convert.   Will not be buying paper novels any more!

That it also allows you to put the same books on your phone, and be able to pick up reading where you left off from your Kindle on your phone is just very cool.

I take the phone everywhere and having the Kindle App on it is just great for waiting for appointments out and about.  More useful than Facebook updates.

We have our own joke car cartoon eBook "Hot CAR-toons, Dudes, Dudettes & Stuff At the Heavy Metal Garage" and that you can get it and others like it almost instantly for about the cost of a cup of coffee is just a world changing event.

May be we will be able to do a book with music as well as illustrations and text in the not to distant future.....


Posted by Adrian Bruce @Megacurve at 8:41 PM No comments:

For the last few months the Tech News has been about the death of the PC and the growth of the Tablet and Smartphone markets.

Particularly that Tablets are outselling PC and laptops by a wide margin now.

Now the interesting thing about that is that you can actually get real work done on a PC or Laptop.  A Tablet is a consumer device for Facebook, Twitter, magazines  newspapers and surfing the net. As a Smartphone is also really good for Facebook and Twitter, and you pretty much need, or have a phone.  Our Smartphones can do music, eBooks, Videos and all that, but we always have to worry about the battery running out, and not actually being able to make or take a call, or worry about the outrageous data costs from Telcos.
That leaves a Tablet more for reading and surfing stuff. And of course playing the odd game. Angry Birds or yet some other variation of Tetris....

Most things people do on a Tablet are actually much easier to do on a Laptop. That keyboard just makes things way easier if you actually need to enter text, cut and copy sections of text and actually produce something. Students need laptops, not just Tablets to be able to use the material researched.

Tablets are great for Photos, but using them as a camera is just embarrassing, but people do it.

The magazine industry and newspapers are also targeting Tablets as the digital delivery medium. Such as this Australian Newspaper or this UK Magazine.

And I just got an email that the biggest CD and DVD retailer here, JB HIFI  is now selling eBooks.

The Android phone may now be taking over the phone market, but the iPad is the king of Tablets at the moment.  The displays are color and you get about a day of battery life out of them.  Steve Jobs may have insisted that the 10" screen was the only one, but it looks like the 7" displays of the iPad mini and like Tablets are the real sweet pot as far as sales are concerned.

The iPad mini sized Amazon Kindles with eInk displays have up to 8 weeks of battery life, a 16 color gray scale display that looks a lot like paper and can be read in bright sun light.  AND, you get content delivered almost immediately from anywhere in the world.  The display simulates paper very well, but not color, which makes it a draw back for what we all read on a daily basis. Newspapers have been color for a very long time now, and no one will go back to none color newspapers.

Amazon has bought liquavista, the color eInk display company.  A Kindle device with a color display, can show video, and still have weeks of battery life may be the real platform for magazines, books, newspapers and comics.  The real consumer stuff the Tablet market seems to target.  An iPad Mini with such a display could also be ideal.

We are very interested in all of this, and have our own eBook on Amazon.
Hot CAR-toons, Dudes, Dudettes & Stuff At the Heavy Metal Garage  has color cartoon jokes and chapters of text.  It is completely usable on anything running the free Kindle App, such as my Android Smartphone, and even the low end 6" eInk wifi Kindle.  More colorful with a color Kindle, but the eInk Kindle display is wonderful because it doesn't have any issues with glare and is so much like paper.

So if the Tablet is the consumer delivery platform, books, magazines, newspapers and a few other media, may in the not to distant future stop printing on paper, and deliver directly to your tablet.  Not shipping around paper will really be a huge change. What about all those printing companies and delivery people? What about book stores and newsagents?

May happen sooner than you think.  We don't need local business directories or phone books printed on paper any more. We use the Internet to access that stuff, and get the latest Bus Timetables.

So if Tablets are these consumer devices, then producing the consumable media is where the real industry may be supplying the content. We would imagine this is not programmed Apps, but the future versions of eNewspapers, eBooks, eMagazines, eNewsletters and eMail.


Posted by Adrian Bruce @Megacurve at 8:01 PM No comments:

Our New Hot Car Cartoon eBook is now on Amazon

The cool thing about Kindle books is that you don't actually need a Kindle. The FREE Kindle App is available for all computers, tablets and Smartphones so you can use what you have as an eBook Reader. All Readers are downloadable from here.

We have already posted on developing and publishing an eBook. All very cool. 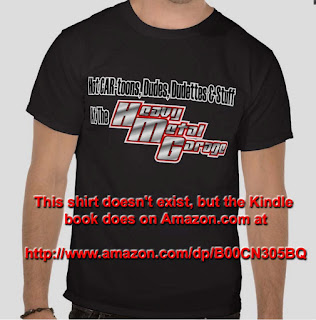 Contact us for details at Art & Technology, or go to the Amazon link above.

Posted by Adrian Bruce @Megacurve at 11:01 PM No comments: