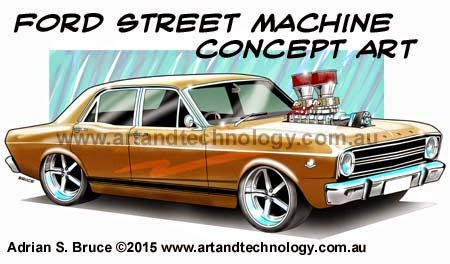 This is a 1967 blown Ford XR in Bronze with low profile tires. Very unlike how you would do it in 1967. The car hasn't been built yet, and this will help the builder decide on the direction the will go in.

One of the things Chip Foose is known for is his concept art. The idea on paper before the shop begins work at Overhaulin'.  But way before him there was Hot Wheels, Ed Roth and Tom Daniel in the 60s and 70s. Roth and Daniel had model kits of their machines available to any young man lusting over fine automotive awesome coolness.  Here is something in that 1970s  1/24th Model Box style I did previously. Southern California Custom Cool. 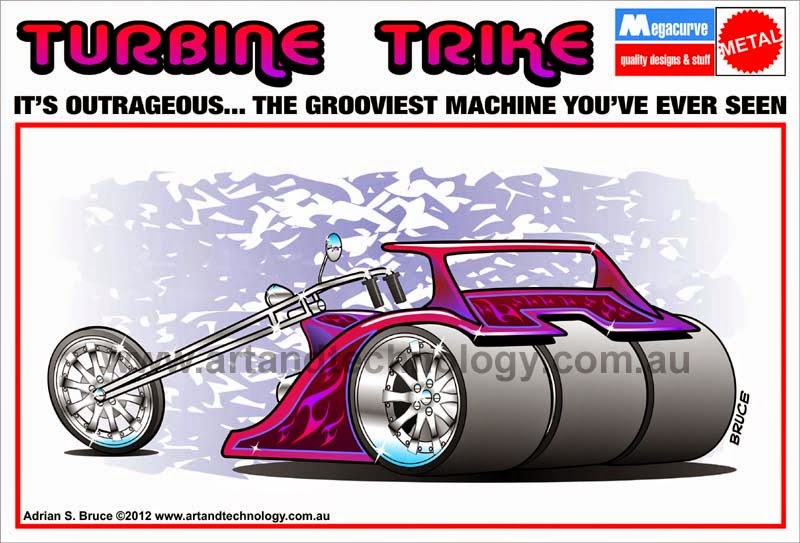 I'm thinking of talking about these influential designers and a few other things in our next Podcast. I had Hot Wheels and the Tom Daniel Model Hot Rods and drew thousands of my own when I was younger. A major passion from maybe 1968 till 1974....

I thought I was going to be some type of car designer before I was told in no uncertain terms no one actually did that in Australia in the 1970s, and so took up electronics focused on audio instead as a more secure future.  (Funny how there isn't any Audio electronics design here in 2015, but people do make custom cars!)

We have a lot of concept art stuff, but it is mostly of real industrial boxes and products we have been involved with. Most of the Concept Art on our website is Sci-Fi styled things. Design sketches in cool grey dry markers mostly.  Hopefully this car artwork will adjust the balance.

The line work in this was done in Corel Draw and the rendering was done in Photoshop. It is 300dpi A3 size.  It is based on reference photos of the base car, available rims and an engine style I had been sent.

It is in Car Concept Art style.

We can can be contacted at Art & Technology.

Posted by Adrian Bruce @Megacurve at 6:26 PM No comments:

Not doing what everyone else is doing

Here is a little story from my High School Days that I now realise is one of the core things about my approach to everything.

In High School I did math, science and art. Never considered music, as it was all focused on the orchestral world, and the school orchestra. Not my thing.   Now the art wasn’t the typical thing math and science students did, unless you planned to do Architecture.  I originally thought I was going to design vehicles and machines, and hey, I had always drawn and was one of my loves. I wasn’t a brilliant student at school or university and found all but a very few subjects boring and pointless. They are taught as they are easy to access and not because they are actually useful. There were always more interesting and useful techniques to master and things to study.

I had some pretty ordinary teachers at school, but have to say all my art teachers were great.  When we were studying art history, one suggested we should make quick sketches of the works in question in our notes to help with remembering them.  This worked well for me and I applied it to most of what I did, in all subjects and fields.  Shapes, diagrams, schematics all ended up in my written notes. It was just completely natural.

Later an interesting thing happened after a 3rd year mid-term Geography exam. Must have been in 1973.  I vividly remember sitting in the school grounds eating my lunch when some kids from another geography class came over and started to talk shit to me about why should I do something different in answering an exam question.

And I had the nerve to do it well!
How dare I!

What a bunch of arse holes many of those other kids were.  I had done something well, but different, and was being criticized for it.  I now see high school as just a subset of the broader society that does exactly the same thing. And I’m amazed to see middle management in Australian companies doing the same thing, but we are known for “The Tall Poppy Syndrome”.  But back in 1973…

When our geography class time eventually came around and they returned the papers, they used mine as an example of how to really answer a question.

So what had I done?

An example; I had a small scribbled sketch of the layers from the ground to the leafy canopy in a rain forest in a small corner of my answer text.  The sketch was in brown and green coloured pencil with black pen.  My answer referred to the diagram in the places it needed to.  The sketch would have taken me 10 seconds in the 5 minutes you had to answer it.  To be as complete with just words would have taken 4 times the space to answer.

I was the only person in the history of the geography paper to ever answer a question that way, and so completely in the provided space.   All my answers were done the same way, and I’d gotten the highest mark in the year. But not being the year end exam, it didn’t count for much. Played my best cards too early as it were.

Other kids wanted to crucify me for it. Yeah, how not to be popular, and I never went to one of those Awards nights where the top 3 in each subject in each year got certificates.

I did go on to design machines that made world breaking music, such as this one  http://www.vintagesynth.com/misc/fairlight_cmi.php

And still do other kinds of art too…

Music that has really influenced

Music that has really influenced my own music making and involvement with production. The very short list:

Some maybe different if I did this list on another day. It doesn't mention Tangerine Dream, John Foxx Ultravox, any of the Soundtrack Albums I have or Slade.

Music and Audio was the original reason I got involved with Electronics, and always have some tune in my head.....

Posted by Adrian Bruce @Megacurve at 12:45 PM No comments:

Many years ago, I went to many/most/all of the Multimedia Conferences at the start of this “zero trillion dollar business” (Steve Jobs words). Many trips to San Jose.  It was exciting actually. All those trade show booths with huge explosions looping on PC monitors like it was all a Hollywood Blockbuster.

Rather more to it than recording and producing a synthesiser based album, for example.

Combining sound and text and moving images and making cool new things.  Now, for a brief time there was Myst and a few other cool game things. But that seems to have mostly fallen by the way side and games like “Call Of Duty”, “Assassin's Creed”  or “Grand Theft Auto”  seem to be what it multimedia evolved into.  Kind of interactive button mashing movies.

And the technology behind it that we now have easy access too, is pretty much desktop video, 3D graphics and sound editing. Pretty amazing really, but they are just tools,  that are free or cheap and run on any PC you can buy.  Top end versions of these things are now what Hollywood uses.

I was inspired. So with these great tools, or cheap versions of them, I have tried over the years making “media things” and releasing them. To see if anything stuck.   Short answer: "not  much".

together using Premier, a sound editor, MicroLogic and a Roland D110 sythesiser.

I ended up being in an episode of a Japanese TV program called “Super Modeller” about the making of them. But that wasn't what I was trying to achieve. 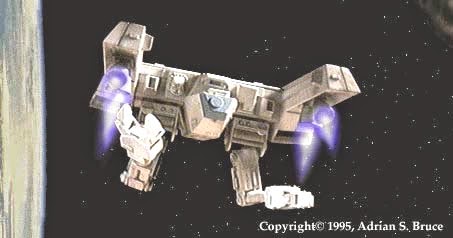 Skip forward 15 years and we have some 24 music tracks on SoundCloud and 32 videos on YouTube. BUT, only 2 of the YouTube videos are attempts at short little Animated entertainment things  I originally envisioned.

This one on Race Car Aerodynamics


And this one on Race Car Turbocharging


These “ The History of Cool Stuff” clips combine some limited talking head animation, a funny voice and script, original background music and “blackboard & chalk” like illustrations showing the development of something.

Kind of a Podcast but with moving images, but not a talking head video. A really low cost , low overhead cartoon that a single person can do in a short period of time. And by short I mean one day. Much simplified over what I thought I or anyone else would do, but basically it is a lot of work even with great tools.

I have a rather long lists of topics I could cover, but after making just two, I didn't think it was worth the effort.

And you think maybe there should be some point to this rambling?

I always wonder if some different combination of promotion, celebrity, quality, technique, production and all the other things that go into making something like this would work better. And if so, what?


Posted by Adrian Bruce @Megacurve at 1:02 PM No comments:

ArtAndTechnology Podcast Episode 0 and where it came from 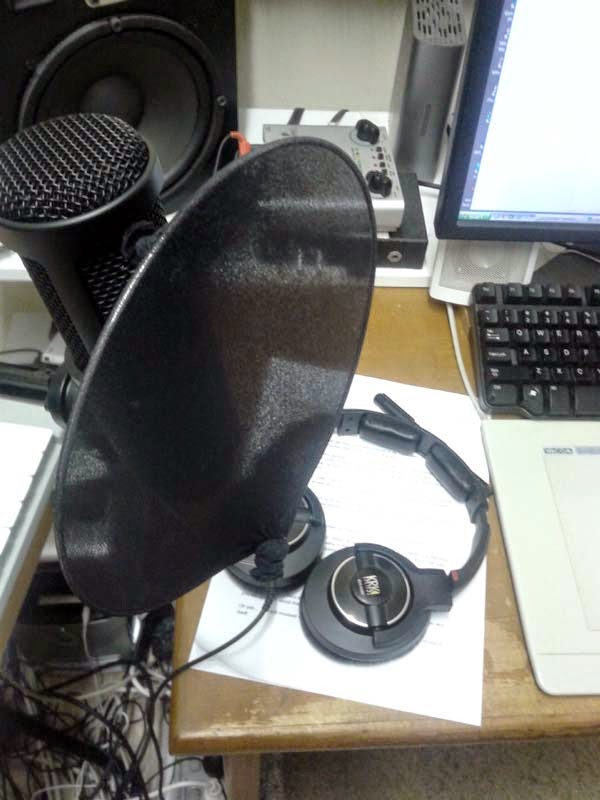 We have done our first podcast and put it on www.artandtechnology.com.au/index.html

This is the RSS feed for the podcast.

Don't know if there will be another.  We will see if anyone but me actually plays it, and as I did it for myself anyway, I've already achieved what I wanted out of it.

Has an embedded player, and link to the mp3 for playing else where.  It is 5 minutes, and a proper Podcast probably needs to be between 10 and 30 minutes. Something to maybe think about later...

We used a Audio Technica AT2020 microphone with a Behringer MIC100 into Reaper on a PC.  Used headphones while recording and removed a few uumms in Reaper, our DAW of choice.  Didn't do any editing other than that, and deleting some too long pauses and left in the mistakes, as it just sounds better to me.
The original is stereo 44kHz but we reduced that to mono 64kbps when encoding to mp3.

I originally wrote a script but an initial test mid week with it showed that isn't the way I should do it. I'm not a skilled voice actor and it just sounded like it was being read, ....poorly.  When redoing it, I just talked about the topics, and it just flows much better..... even with the mistakes, 'cause that is how I talk.

I was doing board game (Tabletop is the new term) research and found a few different things that were new to me. I  started listening to Radio Free Burrito and  really like the whole idea and much of what is talked about. I was inspired to do a Podcast myself.
Now, I have 24 music tracks on SoundCloud, which is something like two albums worth, so I have the recording gear and know how to use it anyway.  Embedding an Audio play on our site was also something I had been looking at for a while, so these things just came together this week. And so here it is.

I also seem to be very late to the party and didn't know Wil Wheaton is now something of an Internet Celebrity.  Yes, more than just a guest spot on The Big Bang Theory, or the kid Wesley Crusher in Star Trek: The Next Generation.  His Blog and Twitter feed have apparently been big for a very long time, in Internet terms anyway.

Anyway, this is just an experiment as we are really more a visual person than a talker, even when making music...   a reason we don't have any lyrics in our music.


Posted by Adrian Bruce @Megacurve at 4:42 PM No comments: