This is a recent caricature that is being provided on a framed canvas print 16" x 24". The original design is based on photographs from the wedding, drawn on paper, scanned and then painted in Photoshop at 400dpi.

The actual caricature was done over a week.  It has an extended background. The resulting high resolution jpeg was then uploaded at The Canvas Factory, were the image was placed, and the option selected where background wraps around the sides to produce a unit that doesn't need any other frame.

The production is all done at Mostly Pty Ltd, Floor 2. No 16 Jianmeidong 2 Road, Haicang District, Xiamen China and the same supplier would be available from many other sites as well.

The canvas is supplied nicely protected for shipping from China. The frame and print has been done with a UV coating to prevent fading in Sun light.

The image file was uploaded on a Monday, and delivered the following Monday for a reasonable price.

Larger and smaller canvases are available and is the printing option we suggest most often for a wall hanging of our commissioned work.

Our contact details and other samples of our caricature work can be found here: Pop Culture Caricatures and Cartoons


Posted by Adrian Bruce @Megacurve at 8:22 PM No comments:

The current software development "fashion" is Agile sprints and continuous releases.  That in itself is fair enough, but having to continuously update apps or code, with no visible or measurable merit is tiresome and a waste of time and bandwidth.  Due to the time constraint on a development Sprint, it seems that many take the easiest, less risky route, by not doing something actually important. Just random small changes. With all the same staff activity, poor management cannot tell the difference!

We can imagine that a lot of  app updates are purely to support some new device, or some corner case bug fix. It is all rather too much like programmer busy work. And if there is no merit in the update to me, I don't want to waste time precise and energy on it!

What gets tough for a typical small business based around a website are never ending random changes by Google to their SEO algorithms. We aren't doing any of the website "dirty tricks" and so do not expect to get "punished" as seems to happen.  Even if it doesn't appear that we are less easy to find in a Google search in our testing, we can have significantly changed site views, and thus job quote requests.
For our artwork, we are always at the whim of Google coders giving priority to skimmer sites stealing our Image content and hosting it on their click bait sites. Change the name of an Image file, and it is now "new" on a different site, with thousands of other stolen Images and the site becomes the master depository of design on the internet!  We think part of the problem is that Google Image search has always been very broken.  We have watermarks on our images, but if a prospective customer cannot directly get to us, and has to type in the url, they are just as likely to go elsewhere.

For other work, it is just a jungle out there, where hype usually wins.... not us.

One of the things we also have are videos of sample work and the "making of stages" on YouTube with our original soundtracks. All the videos have a link back to our main site. Nothing strange about any of that. Now the above graph shows the steady decline of views over the last year for our channel with its current 32 videos.  We have to ask "why" the steady constant decline?  A change to the YouTube search or referral algorithm?  Tastes have changed in 12 months?  The content is "so last week"?   The algorithm is biased towards this weeks new and shiny thing?

They have all been done in SD video resolution and YouTube now promotes HD. Has that been the reason these appear to be demoted? Or is it something else? Are there now "better" videos doing the same thing on other channels? It seems to indicate is that spending effort on YouTube is now not worthwhile for what we do.   Without any guidance we don't know what to do differently.

Now it isn't just me that has noticed view declines.... with the most likely reasons being that Google has changed the definition of what a view actually is, to probably include retention, in an attempt to get rid of bots and bought clicks gaming their paid advertisement system.

That is all likely, but this view per platform shows the mobiles have dropped off a lot, and they are 54% of all views! Or rather things claiming to be mobile views have dropped off.  Could be related to the "Facebook Fraud" bought likes issue.  THE AD CONTRARIAN   goes into much of how dodgy Social Media and Web advertising is, and this could just be an attempt by Google to improve the quality of their system.

Also note our videos work just fine on SmartPhones, so this decline for SmartPhones is "interesting". We could guess the countries involved in being paid for clicks have been using Mobile Phones...      but we are just guessing and don't have the facts.

Anyway, we have been told the videos are helpful and should leave them at that.   Videos aren't like a website where they can be updated.  Notice that the dates I added my last two videos didn't change this downward trend of views at all, so if this was a way for Google to encourage authors to make more new videos, it has done the opposite.....

Random, Continuous Change is NOT the same as Continuous Improvement. Ask Microsoft and Nokia why they fell from grace.  Some companies don't seem to know the difference.  KPIs  are not as trivial to set as most MBAs think.....

Not all change is good and worthwhile, other than keeping a bunch of smart programmers from solving the worlds ACTUAL REAL PROBLEMS, like Gene Therapy, Cancer, Alzheimers or world pain and suffering.

Keeping up with, and working out how to cope with, the changing web is an ongoing, unwanted challenge!

Posted by Adrian Bruce @Megacurve at 5:50 PM No comments: 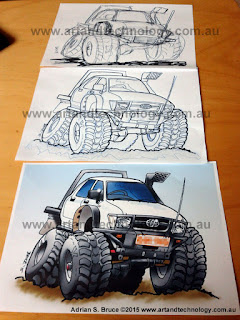 Here we have some of the stages from rough scribbled sketch to final rendered cartoon of an Xtreme Toyota 4x4.  Ian Johnson would approve.  Three A4 sheets photographed with a phone on a table.

It isn't so exaggerated and extremely caricatured.  The final image is for printing on A3 paper at 300dpi. That is an image at 4961 x 3508 pixels.

My first scribbled sketch made it look more like a monster truck, but we toned that down.  The middle image here is the way I now do the more refined sketch in non-photo blue pencil and ink directly over it in Artline and Copic markers and brush.  Just love those brush pens.

I have a light table and start the refined blue pencil sketch  on another sheet of paper over an enlarged agreed to rough sketch.  In this case my original monster truck styled thing was edited in Photoshop to form the starting rough scribble at top  here....  printing it out also enlarges it to the size we need.

Not having to erase the pencil keeps the ink lines sharper, and it saves all that time and some damage to the paper. Scanning in RGB then selecting the Blue channel drops out the blue pencil leaving just the black lines.

That is then colored in Photoshop, using a Wacom tablet.  I call this the Digital Comic Approach.

This was a commission for a gift....

But is it finished yet? Maybe not. Without out some time between doing it and being able to review it, I don't notice mistakes that need fixing. And doing it in  Photoshop makes that easier and invisible. Like is that front right tire just a little too tall?

Posted by Adrian Bruce @Megacurve at 9:09 PM No comments: