In 2016 I built a PC from parts as Windows XP on the DELL I used was end of life.  I used to always get a new PC at end of life, so I wouldn't loose any work by doing anything to a functioning machine.

At the time I bought the normal Microsoft WIn7 64bit PRO box, but as I wanted 32bit, the PC parts guy made a 32bit win7 pro DVDR disc for me, you couldn't buy it any more, but that may have helped me last week.  Installed with key from the WIn7 64bit PRO box.

Wasn't all smooth sailing though. On my i7 Win7 machine CorelDraw12 would crash as soon as you tried to draw anything.  It took many weeks of looking for clues on the internet, but it turned out the KODAK COLOR DLL, kodakcms.dll , it used wasn't compatible with THAT i7 processor, but worked fine on others! But luckily, there was a free Kodak app you could download and take a latter version of the DLL from and things were all good!  Things like this is why I want to have the old system around and usable until issues with a new system are resolved. I always want a backup.

In 2018 bought a WIn10 64bit Lenovo i5 ideapad 520  in planning to move back to Japan, and needed a machine I could use as soon as getting off the airplane in a new country. The desktop would take 3 months to arrive, with most of our other things. I had done the same thing back in 2001, moving from Japan back to Australia, when I bought a Cannon Win95 laptop as carry on luggage.

So the last 3 years have used the Laptop with the PC as a backup.  Had to put win10 on the Desktop early 2020 as win7 was end of life. Win10 installed as 32bit, and has become quite a pig in the last 2 years, where even just starting Chrome caused lots of disc swapping. In win10 the antivirus stuff and system just uses most of the memory.

The thing about the Laptop though is the fan is in your face, noisy, and the keyboard is pretty terrible. So the last 6 months have mostly used the PC.  Unplugging internet, killing off things using Task Manager and enjoying the quiet.

So 2 weeks ago looked at installing 64bit win10 and making it my main PC again. Found I can install win10 64bit Pro and use the original key.

So bought another WD 1TB SATA HDD, same as existing one actually, and plugged it in instead of the 32bit Win10 drive, and installed new Win10 64bit and authorized it.  My plan was if it hadn't worked, I could just put old HDD back in without loosing anything.

After Win10 64bit running,  put the win10 32bit drive as drive G: and copied all the stuff I needed and reinstalled on the 64bit drive C: . Later I can just use the drive G: as more storage.  I have just never filled a 1TB HDD. The things I make, illustrations, videos, music just aren't very big.

In the illustration work I do, I end up installing some font just for what ever project, so haven't reinstalled all my fonts. Just the few BLAMBOT bought ones and others I use a lot. Also ARIAL UNICODE MS which was in win7 but removed since then, and ends up in many of my documents I still use.

It was really usable again, and could use the 8GB that had always been in the machine.  BUT, 16GB is better, so found out replacing memory with 16GB CORSAIR DDR4 Memory Module VENGEANCE LPX was the way to go, and did that a couple of days ago. 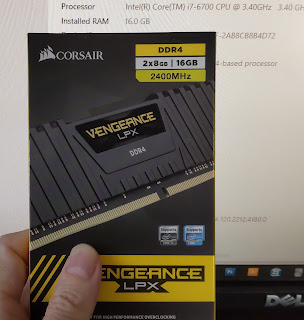 Ran memtest86 to prove the new ram was fine. 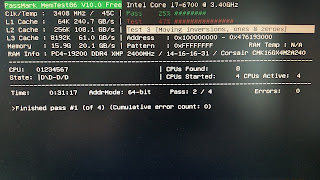 So a really usable PC again.

Both my desktop PC and the Laptop are not compatible with Win11, without hacking the Win11 installer, and from what I have seen so far Windows 11 looks like a massive step backwards. So not considering it anytime soon

Will see what happens by the time Win10 is end of life.