Making a SHORT on Making Music for a SHORT

Couple of days ago, did a YouTube Short on recording a take for doing the music for the 18 second animated/ time lapse shorts I have been making the last week.

But I didn't have both hands in frame in that, the way the phone was positioned. So to try and fix that this morning used some Foamcore, tape and rubber bands to make a camera holder. After cutting one of the side supports, I changed the blade in the OLFA cutter. That is why one side has a clean edge, and the other ragged from the blunt blade. 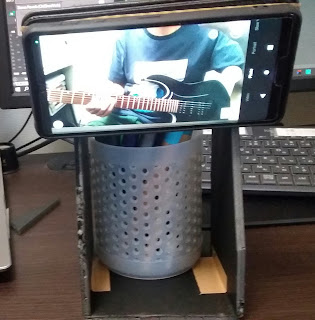 Used a pen folder full of pens to keep it in place. It had to be positioned on my desk, up a bit, and pointing down, to be able to see my hands and the guitar. 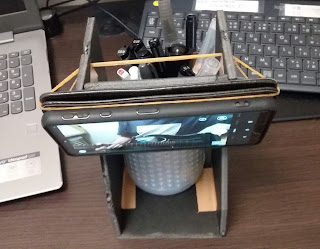 For the first attempt, it seems to have worked okay in 16:9 format, but when making a 720x720 formatted SHORT, to keep hands in frame meant zooming in, but not enough to fill the square frame, so added a FLOWER POWER background from a previous animation. Could always try the vertical format, but that limits it to ONLY being a SHORT, with a limited life of between an hour and 24hours.

Many other players hold the guitar more vertical to fit the format, or have everything much smaller in frame. That maybe okay with 4k video, but I just used 1080p 30fps.

Not sure if I will do another of these, two is enough, but it isn't like I spent any money to build the phone holding rig, so it doesn't matter.

Just doing it will probably lead to something else. Usually does.

But as is, I used part in this little 19 second animation, made in  Moho Pro 12. 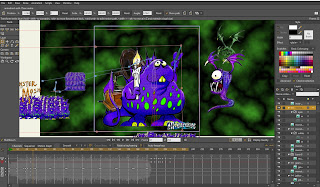 Mostly employs 2D bone dynamics and particles.  Maybe some kind of Halloween 2022 thing, but not pushing it that way.