Most of the YouTube videos I made in the last 6 years got around 10 and no more than 30 views. And 0 likes. It wasn't worth the trouble.

SHORTS are the new YouTube copy of TIC TOK and have to be under 60sec but 18sec is the sweet spot on TIC TOK. That isn't long enough to do the "music video" things I have mostly made previously.

Of course much of TIK TOK and SHORTS is just vapid garbage. It is like people wasting time TV channel surfacing, where they don't even have to change the channel.

Recently discovered the free qStopMotion can do time lapse using a webcam, and stop frame animation. Dragon Frame is the industry standard for stop frame animation, but having played with that 25 years ago, I know how much effort is required, even if the software isn't expensive. Not really interested in stop frame any more.

The last one I made above combines time lapse drawing a silly monster, then animating it and some original music.  It is only 18 seconds long. It got 5.6k views in the first 24 hours. It was the 4th variation of the approach I was experimenting with.  Absolutely no regard for realistic animation seems most popular.

The time lapse section was recorded through a webcam held to a mic stand with rubber bands over my desk. Out of the way, and gave okay pictures for the 720p images I am using. Interesting learning what works best. Found 12fps is fine, and I had been doing the previous things at 24fps. 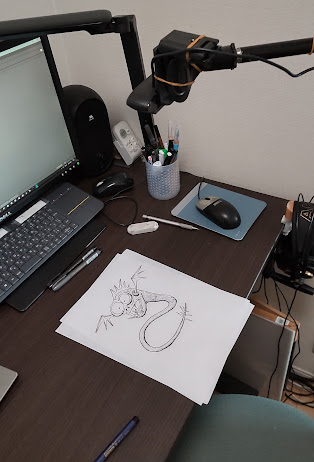 Two weeks ago I had no idea I would make a short video and have a video people actually watch, probably mostly kids, and that it combined time lapse of me drawing and 2D animation. I did try a drawing time lapse years ago, and few watched it, but I think that it is a silly monster is why it works this time.

That it was something I would be doing I would never have guessed .  I think the recent years have been like that.

Would be nice when I can put these techniques into something worthwhile.

In preparing to make another short, I improvise a few things, then edit them together to fit the time. I always have the music first before I animate anything. Here I just used my SHARP Android Phone to record a few takes. This is just one.  I used SHOT CUT to make it  720x720, and increased the audio level 4dB.  I would normally have the effects send turned off when recording, but it sounds better for this to have them on.

The phone was in landscape more on my desk leaning against a pen holder, but it is obvious you really need to see both hands in something like this. Will have to jerry rid something to hold the phone a little higher, and point it down for next time.