New Music Track: The Bots Are At It Again

Fun On Social Media, the food pics, the love from your closest 1000 friends, the fascist bots, the misinformation, the utter ratbags, the trivia...
So this is a love song to Social Media.  It always seems to me the most trivial, or hateful,  things get a gazillion likes and the simple 2 step plan to stop world hunger gets 2.  Mostly shows people are terrible much of the time.
Also made a "video", that is mostly the Reaper Project.
This is the fourth song with lyrics and singing I've now written. Of course it takes more than 4 times to be actually good at it. Practice makes you better at it.  The writing, recording, re-recording and editing all happen at the same time. But the first thing that I make is a drum track with a fill every 8 or 16 bars.  I record to that and never turn on the click. I hate the click.  I record many long improvised sections that I edit together to form the composition.  My ideas for lyrics get modified as I try and sing them.  Once I know the song I will record them again, and change things that seem to need changing. It is also just a song, so ambiguity in the lyrics is par for the cause. This isn't a policy whitepaper or report. 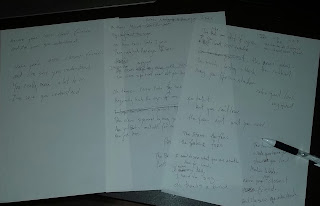 A very interactive process. As I have many alternate takes, I can come back later and edit in parts of other takes to change something, and I usually do. What I do want is a simple, memorable, catchy chorus lyric. That is a core of pop music, but also what I want for my Metal-ish stuff.
The problem in making something is ALL YOU CAN HEAR ARE THE MISTAKES.  So I assume most of them are "character" and only fix the biggest things, and leave the rest. My method still makes the result a performance.
Feel the more songs I make the higher the percentage of "acceptability" is, so practice makes them better.
I can hear a few things wrong with this, particularly, slightly off vocal pitch, but those are the bits that are "bots POV".  Guitar in the verses is overplayed and too busy, but the level is low, so it doesn't hide the vocal at all.
This was done on a 7 String Ibanez GIO GRG7221, with the lower B down tuned to an A for DROP A, 1 finger power chords on the lower 2 strings, even though the lowest chord is just a C here.  Distortion is BOSSS METAL CORE DI'ed into computer, and used cabinet IR's. for final sound.
Again very inspired by early Freak Kitchen, and Mattias's do your own thing. Grow your own moustache, being his term for that.
The chorus is very METAL with lots of CHUG, but most of the verses are more POP.  I do like that chorus riff.
Put together this one page comic, but it has way too much small text and needs to be MUCH longer to do the subject justice. 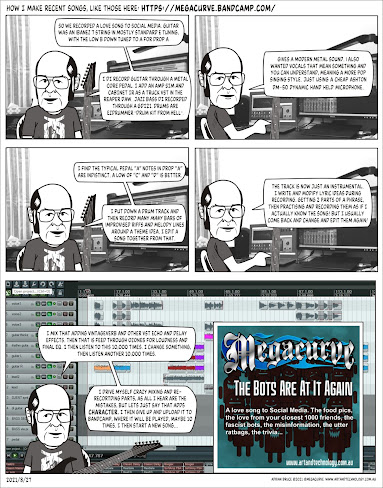 Next song has to be about my distaste for  Fandom gate keepers.
Posted by Adrian Bruce @Megacurve at 9:59 PM