August 1st 2021 was the 20th Anniversary of us moving back to Australia after 15 years living in Japan. Just a couple of days ago as I write this. Moved back to Japan to live 19 months ago now though.

There was shortly to be 9/11 which caused almost as much trouble as the Corona Virus has recently.

Living in Japan for 15 years meant that there was a lot of non-Japanese TV I had not seen, such as Seinfeld  and .  Really big at the time, but non existent in Japan for us.

On getting settled back in Sydney and looking for work, I did manage to watch  Home Improvement as it was on 10AM every week day. 9/11 pretty much made the work world for me stop for 6 months at least. No one was doing anything and took a wait and see attitude to any new projects.

One of the things I did start to watch soon after getting back to Sydney was Farscape. It had been running for a few years and was being made there in Sydney Australia! 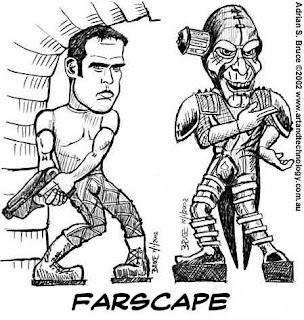 Must say I don't remember much about it now. I didn't see it from the start. Maybe from Season 2 or 3.Did the cartoon above about it. Remember there was a LOT of running about the ships corridors, as he is depicted above and a lot of interesting characters and puppets. But it was just a TV show I bothered to watch.

I bring this up as a few months ago I think Farscape became available on a streaming service and people like Joseph Mallozzi saying how great it was. The guy with gun did end up in Stargate, so there was a connection there.

So I think about what I remember feeling about it 20 years ago and wonder if it is worth the trouble of tracking down and watching the first 3 seasons. Probably on DVD, as that is most convenient for me here.

So far it isn't a hard YES. Don't remember being that interested in it, other than someone was actually doing something in Sydney that wasn't just a cheap soap opera.

A bit later Battlestar Galactica started and I started watching that, but I was finding getting consistently work hard at the time, and I didn't need the downer that was that show.

So I'm not sure if that confused memory has rubbed off on Farscape a bit. There are many shows I have never watched. Haven't seen any of the shows raved about, briefly, on streaming  like THE MANDALORIAN, BREAKING BAD, STRANGER THINGS or  GAME OF THRONES.

Seem to doubt Farscape is worth the trouble. But I will want to watch something before I re-watch Babylon 5 again in a couple of years. I watch TV to relax before going to bed but don't want a show to send me to sleep, and I think some of Farscape did do that.