This track is free to download. You can pay $0 if you want
We have been very inspired by Rick Beato, Ola Englund and Mattias IA Eklundh in recent months. We have revised our studio now with two second hand guitar pedals and a 7 String Ibanez.  The very small studio I now have made me change what I was doing as far as monitors and other things. Now using small JBL-104 powered speakers. Love them.  I have bigger Yamaha Towers in the adjoining room for final mix checking. I also have a small portable fold up guitar stand now, as there is just no room to lay a guitar on the floor next to my chair anymore. Also using headphones more and tools to support that listening.
I did a similar thing about 10 years ago when I changed a lot of what I was doing. That is when I bought my Reaper DAW license and did serious computer based recording. I also discovered back then  I was using the wrong type of guitar pick, getting much better feel with a DUNLOP 500 1.5 , the purple one.
I used DROP D back then, but this track is using my Squire Strat down tuned and in DROP C#. Here is a cartoon  about this 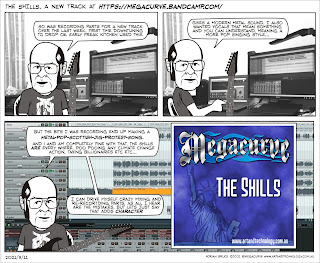 Freak Kitchen style of lyrics is also a dramatic change for me. Most of what I had done was Instrumental. Want the next few things to actually say something.
BUT I'm not interested in sounding like a commercial pop or rock group and will do things with non standard song structures. THE SHILLS  isn't your standard structure either, but close if your not   listening very carefully.

Has a loud "drunk" pop verse-chorus vocal over a very metal riff. There is then the very different almost spoken verse over a Scottish Jig style backing. I just didn't add bagpipes to make it obvious. I used a cheap Ashton SM58 looking cardioid microphone hand held to record the vocals. It doesn't have the sensitivity of my AT2020 so it doesn't pick up the air-conditioner or fan noise on these hot summer days.  Probably more lo-fi sound. It also doesn't take up much space and is easy to put out of the way.  Haven't done a lot of singing, so if you think the vocals are a bit off, then your right.  I call this "character".  I need more practice.  Do warm up exercises and the like before just doing it, next time.
My Jazz Bass was recorded thru a Behringer GDI21 in high gain mode. Until now I always used a Line6 BassPod, but I think this sounds better in this case.
Following  Mattias's "do whatever you want".  Having fun. All the instrumentation is very METAL, but I don't think that is what you hear at all. No one makes any money to cover costs of  recorded music, so it is what it is. I will listen to it far more an anyone else will. 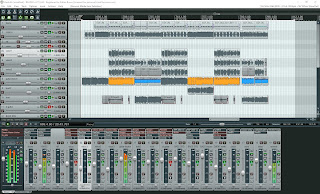 The Shills  Reaper Project
And the Youtube video we made. Now in Reaper v6.35 and we redid the vocals and changed the mix