We have been using the GainClone Amp in our little studio since December 2014 and opened up to put in a larger 160VA  toroid transformer, instead of the 2 traditional units I had on hand at the time I first put it together.  Also going to replace the speaker terminals for ones  that can take banana plugs.

The Amp has been working great.   But upon opening it up, we see that would not have continued for much longer. 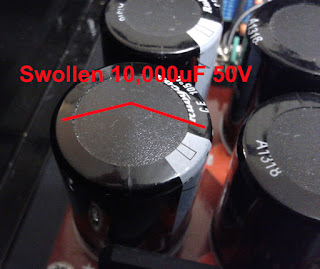 One of the 4 10,000uF 50V electrolytic capacitors in the power supply would soon expire.  It has expanded and will rupture.


So we caught this in time before any damage was caused. Only real issue for me was I expected to get it up and running again in a few hours, but I will have to order  new supply caps online for delivery next week, around $25, as the local shop doesn't carry 10,000uF 50V PCB electrolytics anymore. Then again, 10,000uF at least on a channel is completely usable, until the new one arrives.

If one is near dead, they are all suspect and replacing them is the safest thing to do.   That cost is as much as the PSU and Amplifier modules cost in the first place. Stuff from China on eBay is just incredibly cheap, not always the highest quality but it isn't as if this is much of a problem. Now the capacitor is actually a Japanese Rubycon, and should be a quality part, but it may be forgery or a reject part.... who knows.

In the mean time I can use it fine with only 3 capacitors....

We ended up getting nichicon 10,000uF 50V capacitors from RS Components. .. mostly as it is free postage here, and no minimum order.