There used to be a fantastic haven of exotic audio equipment in Sydney Australia in the mid 1970s.  It was called Kent Hi-Fi  and was in Kent Street, not too far from Town Hall Station. Hi-Fi was a thing and musicians got paid for making music back then.

I used to frequent this place and one particular track, played in one demonstration kind of set the standard for what great Hi-Fi is to me, and what it can invoke in you.

They used to have a large double height room with all the speakers along one wall, the long edge. It would have been at least twice as wide as a normal living room. Don't remember what the speakers were, but I kind of remember they had a set of JBL studio monitors ( 15" woofer, horn tweeter etc)  in there as well, driven from a big power amp, either a Phase Linear 700B or Ampzilla (I remember the big glowing VU meters) with a Technics Direct drive turntable with SME arm and Shure V15 pickup.  The top of the range gear of the time.  Way out of my price range. Still way out of what I would pay, even today.

And it played Edgar Winter Group's Frankenstein. This is a really well recorded, mixed and mastered track and it was fantastic.  There is a drum break, actually a drum kit and a set of tom toms played by two people,  that sounds great on just about anything, but sounded very real in that room.  It also has that wonderful downward sweeping Arp 2600 Synth sound. Part of it was because the speakers were as far apart as in a small hall, and it was at a real life volume.

That demonstrated the point of technology to me, at that point in time.......

Years before that at school I had built my own speakers, using 10" Plessey drivers, assembled a Playmaster Amplifier Kit (From long dead retailer KitSets!) and bought the smallest Panasonic stereo cassette deck from the part time jobs I had while at school.  So I was already on the way to having a technical background in the world of audio. Why and How it worked..


I went on to work in music production systems, then spent 15 years in Japan at a synthesizer manufacturer.

Have a free webcomic on this now, This Is Where The Smoke Comes Out that goes into those memories. 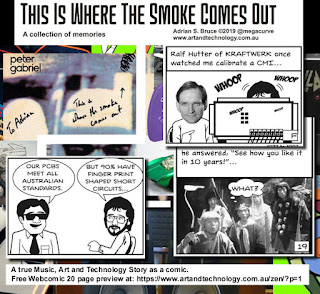 Music and Audio has always been important to us, and Hi-Fi was originally a driving force. Not the main thing we do now though......