In The Asteroid Belt: Part 5 Making Of

It had started with wanting to make a model for a scene inspired by a John Harris painting depicting a massive spacecraft.

It was finished after a few weeks of being inspired by early Jean Michel Jarre and Tangerine Dream music and wanting to put in lots of sounds and textures inspired by them.   And not forget the guitar either. Love heavy riff based guitar stuff.

A few of the scenes in my animations come about like that. Something to "pay homage" to something inspiring, or an excuse to have something to add sound/music inspired by someone's music I'm into at the time.

The KORG MS-20 mini received a lot of use in this making those old analog noises.  Swoops, bleeps and bloops.  A versatile device, but there are also a lot of tricks, as things don't operate as you may expect.  Turning down something may give the effect of increasing what you are after.

I thought this Part 5 could make a side story, and not directly continue on from the end of Part 4, and wanted to do something a little bit different.  The music for example in this is the BINAURAL MIX FOR HEADPHONES and not the stereo of the previous parts.  Used dear VR Music for the 3D panner and I think it works really well.  May be how I mix the future parts.

The end scene in this actually has a background rendered in 3D Animation Master '99, and isn't all photographed models and painted images.  The robot model moving around that red passageway is just a 2D animated photo.  Rendering the 3D made me remember how much I hate waiting for frames to render.  Using obsolete software wouldn't have helped with the speed, but did with the modelling and animating as I knew this software very well in the late 90s.  Modern renderers can do a trivial image map with shadows in real-time now, rather than the 4 minutes a frame  (for 219 frames) I had to endure doing this.

Have looked at Blender multiple times over the last 5 years but have yet to do anything worthwhile with its modeler. Just get stiff shoulders even thinking about how long I would need to spend bent over the mouse and keyboard to get fluent with modelling, texturing, lighting, camera movement and rendering with it. Doesn't mean I will not eventually get the drive to do it. Just not at the moment.

The textures used all come from the new model. Manipulating panel images in Photoshops made the interior ship wall for example. Only made the rear end part, but the top and bottom surface have some interesting detail. All that is needed, for the time being at least. 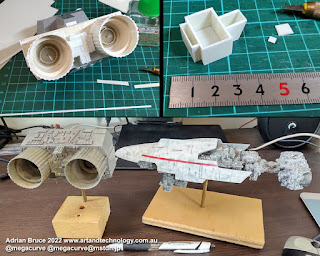 The main thing about this video for me though is the Jean Michel Jarre /Tangerine Dream music I was inspired by while making it.  Sequencers and strange noises.  Really love that. It isn't that I copy that stuff while making my own music. Just something of the feeling I get from it goes into my own.

The video is composed of a few scenes, and the music is too. The whole soundtrack is only a bit over 3 minutes long, and each musical section is only up to 16 bars long, but it goes thru the same kind of changes an old school Tangerine Dream album side or one side of Jean Michel Jarre's Oxygene does in 30minutes. This is currently a very interesting thing for me to work with.  Much more so than a 3minute pop song. Can't say I am doing music to support the visuals (through emotional clues to support or contrast with what as being seen)  like you would as a "soundtrack" composer, but I don't have to.

But as few actually watch/listen to these videos it isn't as if there is any audience to satisfy,  I  do whatever I feel like at the time.  😀 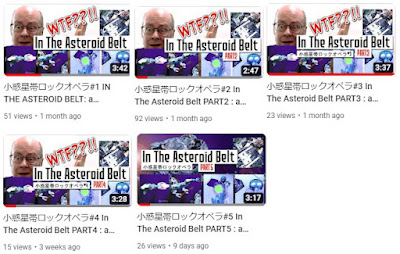 I have put all the music from the 5 parts, so far, as a soundtrack album on Bandcamp, as one 16minute piece of music. Free download

A pretty dramatic change going from part1 to part5.  I don't have any problem with that, and relates to what I was think and feeling at the time I did it. Kind of like  coded diary entries.
So will there be a PART 6?  Probably. Not something I feel like starting today though.
We can be found at ArtAndTechnology