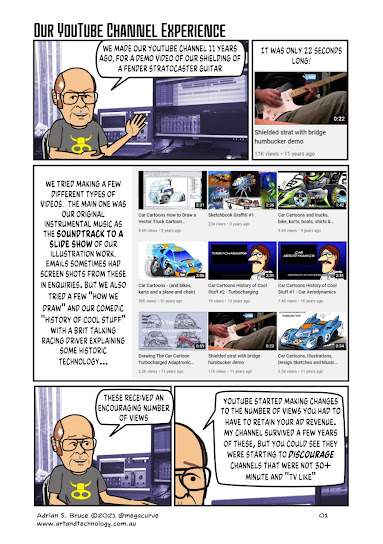 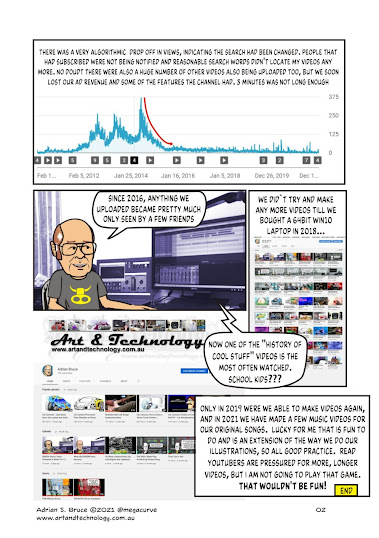 Our YouTube Channel is https://www.youtube.com/user/adriansbruce/featured
So YouTube has had some dramatic changes over the last 10 years, and I'm not the kind of creator they encourage. Still convenient to use though.  I'm not going to do anything like Rick Beato though!
I recently did 6 Youtube shorts for my recent songs.  One of them got 162 views in 48 hours. The most views I have had in a few years. The others got nothing. So I'm in some kind of  Google Algorithmic Black Hole, where what I upload isn't recommended to anyone.
An acquaintance on Twitter who mostly does hiking in Kyoto Videos,  uploaded a few, even shorter things and got hundreds and thousands of view overnight. Definitely get that "why do I waste my time?" vibe with it all.  Social Media makes most people miserable, and I am one of them.
I have a blog post from a few years ago how I documented an Algorithmic change Google made where my website just dropped out of search for a year.  Absolutely nothing I could do about that then, and expect this is the same kind of thing.
Recently in some change Google made I had to answer the question " Do I trust Google?"  and really, I don't!  Not at all.   At one point the owners had said "do no evil", but they have long since left the building, and Google is as bad or worse then Facebook for it's Surveillance Business Model.  They just haven't gotten the press they way Facebook did.