New Music Track. Time: Use It Well. And a Summary

This was something I did months ago, but abandoned.  Came back and it is okay, added some lyrics, keeping it mostly an instrumental.

Social Media sites are mostly terrible. Facebook and Twitter are filled with the most terrible people and things, and encourage that "for engagement".  But I stay away from that and don't play that game. So I have so few "friends" or "followers" and follow so few, that being on social media is mostly a waste of time.  I have an Instagram account, posted a few things when I opened it, but use it to follow a friends art project progress.

This is a reminder to myself to not waste time with social media. Much better ways to spend your time. Like making music, cartooning or studying something new.

So in the last few months we wrote and recorded 5 new songs and we put them on our Bandcamp, and we made simple videos for YouTube too. 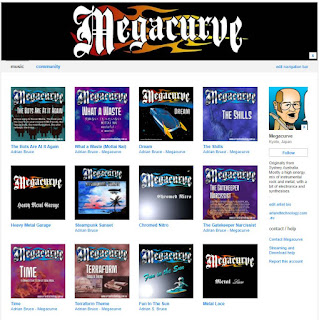 At the time of writing this blog post individual songs have been played between 7 and 30 times. Years ago, when I used my music as soundtracks to my illustration video samples they had some 60k views, but YouTube has all changed since then.
Have a blog post about that too.
Hugely popular YouTubers describe dropping views and subscriptions not sending notifications like they used to, but for a channel like mine, YouTube has it pretty well hidden now.
So if I wasn't making music for just myself, it would not be worth doing.