The move to  computer based recording systems, and project studios in particular has meant you don't need a mixing desk and all that gear associated with it.

A small private studio like my own means I only ever record one thing at a time.  So apart from an Audio Interface to the computer, I have a Monitor controller on the output  to control the playback volume and a single channel DI/Mic Preamp on the input to set the gain on whatever I'm recording.

Both of these devices are actually very simple and inexpensive with current components. And modern electronics means they have such low noise and distortion that they do not impact anything extra on the sound. Your microphone, recording space, guitar, bass or whatever is the limiting factor as far as noise floor and sound quality are concerned.  The loudspeakers, headphones and environment of the eventual listener are far more significant.

But the history of Recording Studios has produced various bits of equipment that have become "Classics" and instead of being distortion free are the  opposite and distort the sound in "a nice" way.  But this distortion is rather subtle, so there ends up being a magic to some brands. 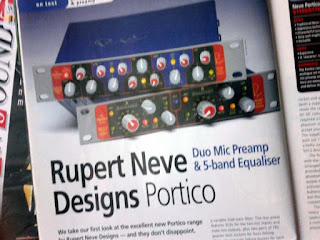 Sound On Sound Magazine did a comparison of some classic pre-amp makers gear, and produced sound files of a piano performance, such that volume differences were all eliminated.  It was then very difficult to pick any one as being any particular piece of gear.  The real kicker in all this is such gear sells for 10 times the price for me to make the equivalent.

The part that makes the biggest difference in these high end components is the transformers used on input and output.   How the transformer is driven and the core saturated impacts the sound.  The current Rupert Neve designs have a control called silk, to exaggerate these pleasant distortion components, but  all the brands have similar design concepts that make that brands "subtle" sound.

All this stuff has become the myths and legend  of "Pro Recording".....  interesting, and if you have the money to buy such equipment, maybe it does give you extra mojo, even if only psychologically.

I can actually buy audio transformers and put them in my own modern designs.  They are the single most expensive component. But I don't actually need the isolation or balancing they performed in the old single sided pre-amplifiers, in my small project studio application.  And I mentioned the cost, right?

But in the end, what is way more important is the performance performed that is recorded. Mistakes and all.  And for the constantly most successful commercial acts (like One Direction or maybe Justin Bieber) an old guy like me would say that isn't that important either,,,,