At The Horsehead Nebula Short

We have been playing around with the Korg MS-20 Mini for the last week and I think it is a wonderfully versatile instrument.  This 40 second short has the lead part using this delayed vibrato patch. 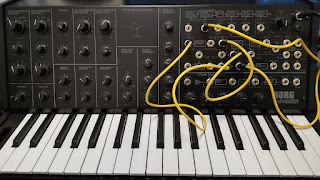 The MS-20 can also make all the weird random noises and things like Thunder and Rain make it perfect for  my uses.  Many years ago I had a Sequential Pro-One when they first came out, but found it very limited. Made nice synth keyboard sounds, nothing outside that. What Roland makes now has the same limitations.

Another thing about this short is it uses a rhythm pattern from the Korg MINIPOPS7. A vst version of one, anyway. This is the rhythm machine used on Jean Michel Jarre's Oxygene and Equinoxe albums. That stuff is timeless to me.

My music is recorded and produced in Reaper. Does what I need, and I only use a tiny fraction of the features it has.  It is mixed for headphone use by applying the dear VR Music binaural panner to each part to position them around the head,  The whooshing white noise is panned with a LFO to move back and forth behind the head.  The lead sound moves between left front and slightly right rear.

The background ships in this were made and rendered in Hash Animation Master '99. I designed and modelled the ships around 23years ago, but making this was the first time to render them at 1280 x 720.  Modern PCs don't have an issue doing that now. 462 frames rendered to .TGA numbered files in 25minutes.  When I designed them, making a tiny movie took many hours.

Those files where then brought into Moho Pro12 and the space pets, music and text added.  Only rendering stuff at 600x600 as that still fits into the Youtube Short format,  works on Instagram, and doesn't take long to render.

The little creature is sculpted from translucent blue and white FIMO polymer clay. This material isn't as nice to work with as Super Sculpey, but we managed. Only a single image is used. Bones have been added the image and animated using a particle system in Moho Pro 12. 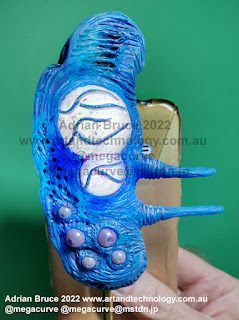 See many youtubers doing talking head videos at 4K, and being pushed to do so, but that is not something I am interested in at the present time.