Oh, What a waste, 勿体ない... music and comic 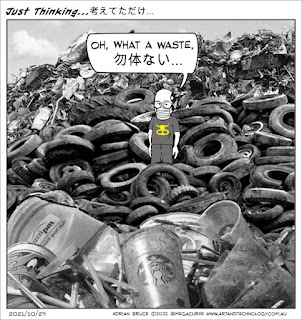 We redid the artwork for our music track, Oh, What a waste, 勿体ない last week and used that in the comic above too.

The photo is constructed from 3 different photos. Single use plastic garbage washed up on a beach in the foreground, used tires in the center and a garbage dump in the background.

Japan does recycling so much better than Australia, and people don't just dump garbage on the street, but it is still a problem.

The release of Windows11, and it currently making even recent computers obsolete is just as disgusting as the trash in the picture above. What a waste!  Same with Mobile phones that can't have the OS upgraded, and gradually stop working as apps use "the latest api" and "don't support that version of the OS" anymore.

It is all so reckless and see this as an environmental issue. Bigger than used straws. Unfortunately the management of companies are rewarded using these strategies, even if it screws the customer base...

Not saying I have any answers, but now having my 3rd Android phone purely because of built in obsolescence, doesn't fill me with bliss.  And that you can not exist without a Mobile phone number now is bizarre.  Without one, you cannot verify who you are!

Used this in my first Instagram video too.  The frame size is wrong in this earlier thing I put on Youtube, but it doesn't matter on Youtube.  This has the lyrics in English and Japanese. Putting those in took all the time. Each is a separate text title, so their starting and ending times is set on the time line.