Home Theater Or Hi-Fi System in a Home?

I used to have a surround sound set up and a large Plasma TV in the living room.  The kitchen and dinning table were in a separate room, but the living room also had a computer and desk in the corner so it wasn't a Home Theater room, but a shared space.

The only time I used it as a home theater was when my wife was out, as it was too loud to use for family living, and she usually wasn't interested in watching most of the movies I did. To have it loud enough to hear the speaking, anything big in the movie was very loud.
For most TV viewing I didn't turn on the surround system and just used the speakers in the TV that didn't create that volume problem.

We sold that house and downsized to a 2 bedroom apartment in 2019. This had a combined, kitchen, dinning and lounge area.  This is a great arrangement where doing kitchen chores doesn't isolate anyone from the sitting and eating area.  It did mean I didn't hook up the Yamaha Surround Receiver and Speakers at all. Was just not appropriate. The TV was also too large and felt like sitting in the front row of seats in a cinema, which isn't to my liking at all.

I watched most of the DVDs I borrowed from the local library on headphones for the 6 months we were there before moving to our new house in Japan.  During that time sold most electrical things, and for the last month only used a small 24" HD TV that was fine in that environment. It had been the Kitchen TV in the old house.

Our new place here in Kyoto Japan has a very similar combined lounge, dinning and kitchen space as the 2 bedroom apartment. Almost the same size, but we have our own rooms too.  So at the moment, we have a high end Sanyo 22" TV in the lounge room with a connected VHS/DVD player and a separate WD Live Media Player.  Can watch the TV from the dinning table while eating and it doesn't dominate everything. This TV has a larger soundbar style speaker subsystem under it and can simulate Surround sound. For a Smallish TV it has amazing sound.

I have been watching many of PS Audio's Ask Paul videos on YouTube and find myself kind of like him here:

Where he doesn't have a High End Audio System at home at all, but does have a home theater.  In another video  he shows you his home office and the standalone downstairs home theater at his house.  Mine was never that over the top, but good enough for me. He also mentioned he has a small audio system in his office but cannot work and listen to music at the same time.

At the present point in time, most of the music in the kitchen lounge area is coming from my wife's iPad. And that is only sometimes.

Now Paul above isn't a musician, so doesn't have a home studio like I do.  So even though my Studio is mostly a Laptop, small desktop Yamaha speakers and a Roland 2 Channel  audio interface, it is more Hi-Fi than what he has. My studio is also in "my room" in the house and not the living area.  Actually my studio is a small (1.7m x 1.5m) alcove off  "my room".

The Laptop can Bluetooth to some larger DIATONE 8" 3 way Bookshelf Speakers for music or streaming playback as I wrote about in the previous Blog.  Radio Stations  Alpha Station Kyoto  or  2MMM Sydney also get a listen.

I also have in "my room" a 24" HD Hisense TV with HDD recording that is connected to my old 32bit Win10 desktop PC running KODI media player.  The Kode Remote Android App for my Phone makes this system incredibly usable.  This is where I have watched most YouTube.  The sound of the TV speakers is fine, but it does have a headphone out and an Optical Sound Out, that plugs in fine to this little Surround Decoder: 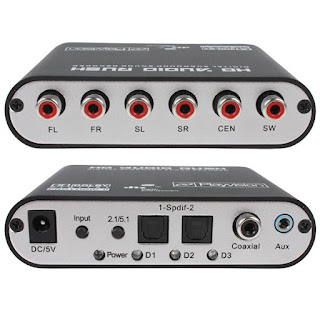 I haven't yet decided if it is worth rearranging the furniture in "my room" to have a Stereo / Surround Audio System connected to the TV yet. At the moment I have two small bookshelf speakers and the 50w/Channel Class D Amp I used to have "in the studio" forming a "sound bar" (the speakers are on their sides with the bases touching, so the woofers are side by side)  under the TV.  The TV headphone out is set so that it doesn't disconnect the TV speakers sound when they are plugged in.

I haven't found turning on this Hi-Fi stereo Soundbar adds much to the TV watching experience.

If I did want surround sound, it would be a small system, but the dynamic range of movies is really too great for me.  I hear it all much better if I just wear headphones.  Like many, I now can have difficulty understanding what people are say in a noisy environment, that has nothing to do with the language they are speaking.

To approach the surround or not from a different POV,  Steven Wilson: Remixing Classic Albums has also done award winning 5.1 versions that I haven't heard. 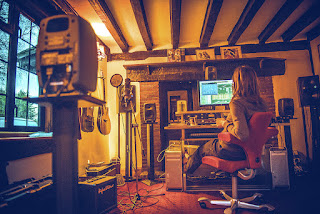 Surround music mixes is something I have had an interest in for many years, and have a Reaper setup that allows me to make surround mixes of my own tracks.  I also did an analogue decoder a few years ago.

Of course not everyone thinks Surround for music is a good idea:

The big difference between movies and music, is that music on purpose doesn't have the dynamic range of movie sound and is easy to manage volume. Especially in an environment like "my room".

So if I wander back to my title question. I don't a Home Theater system for family reasons. The Sound is too disruptive due to movie sound dynamic range. Stereo music is much more important to us, but most of the time, Hi-Fi is NOT required.
I only need Hi-Fi sound when mixing and mastering my own music, which really, isn't very often.
And to refer back to Paul'ss video above,  the only work I can do and have music playing is drawing or making something.

I do a lot of drawing, but if I have quiet background music playing, I am not able to hear my wife call from another part of the house if she needs something. So I mostly don't play much music while working either.