Topgear, Clarkson and the Essays. How Hard Can It Be? 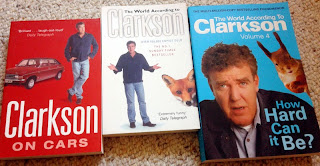 Topgear being funny was due in not some small measure to Clarkson's outrageous writing.  Like:

"Owning a TVR in the past was like owning a bear. I mean it was great, until it pulled your head off, which it would."

And that it was all a boys adventure where they didn't take it all seriously, but it had tremendous production values. All those stop frame/ slow mo/ fast mo moving clouds reflected in puddles near car wheel stuff.

And what was a surprise to me,  three times now, was the books Clarkson has out,  have little funny in them.  Silly, but not funny.

They are collected essays from his newspaper columns,  and  many read to me like "OMG, I have to have an article for Sunday, what will I write?!" and he decided to make fun of some nearby county or something that doesn't mean anything to someone on the other side of the world.  This could be due to time and lack of editorial input for a column, but I don't really know.

And the same is true of the Top Gear Magazine.  Bought a few issues over the years, and found the same thing. The columns from the guys aren't special. The articles don't have any of that Top gear magic to them.
One issue I did get included a collected pink booklet of Clarkson, Hammond and May Topgear columns called Little Book of TOPGEAR GENIUS that, franky, isn't.

A pity.  How hard can it really be? Sometimes, very hard to be ACTUALLY funny.